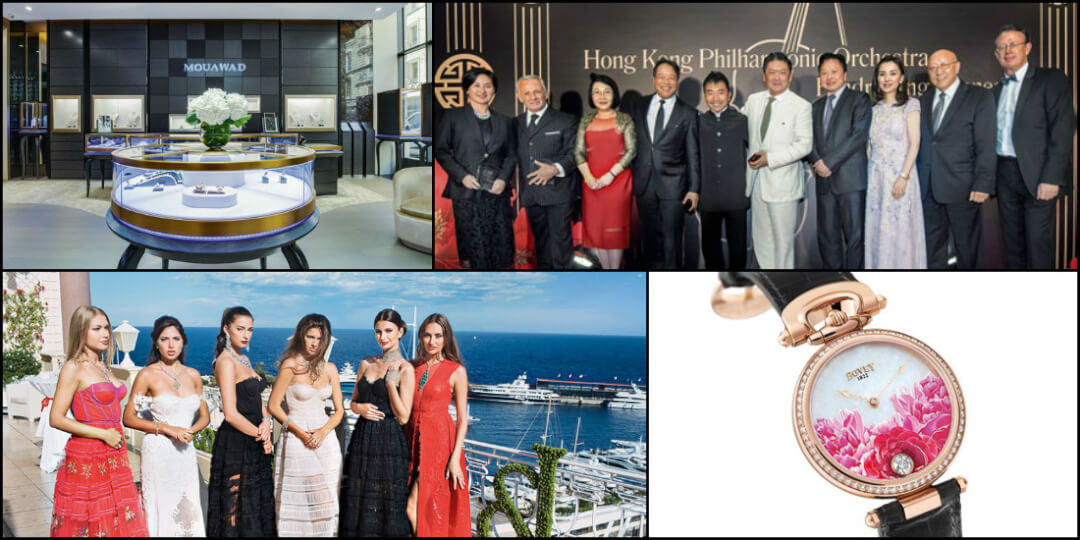 It was a hot summer for Jacob & Co., which was celebrating its 30th anniversary in stellar style with its latest launch : the Astronomia Meteorite. Having achieved icon status among collectors of extreme high-end watchmaking, its extraordinary in-house-developed gravitational triple axis movement was staged on this occasion in a white gold case set with 124 triangular- cut diamonds. Far from relying on this incredible timepiece to play the star single-handedly, the brand sent dozens of other jewelry and watch creations into orbit on the theme “Sky is Not the Limit”. After a successful month-long exhibition a Monaco, its founder Jacob Arabo together with his team then welcomed 250 guests to their retailer’s at Palma, who had also booked out a 900 sq.m. area to toast this anniversary and introduce its VIPs to the latest collections. On returning to Geneva, the same Jacob & Co. live wires continued surfing this dynamic wave and made the most of the last summer days to light up the Montre Prestige boutique that enthusiastically represents them in Geneva.

In September 2016, the Geneva Watch Tour welcomed a new address on the Rue du Rhône, chosen by the Mouawad family to open its first Swiss boutique (and its 17th worldwide). Active in the watch and jewelry business for the past four generations, the Mouawad family has been producing its watches in Switzerland for almost 40 years (formerly under the Robergé) name. It has also been developing its calibers in-house under the Mouawad label for several years, including four new ones introduced this year. Mouawad is of course generally associated with splendid jewelry sets, but the watchmaking passion of Alain Mouawad (read the interview on worldtempus.com) is expressed through watches that in themselves deserve a visit to this new boutique.

Jaeger-LeCoultre and the 7thArt

A partner of the Venice Film Festival for over 10 years, Jaeger-LeCoultre invited a number of friends to the opening ceremony of the 73rd edition on August 31st 2016, and several thespians were wearing creations by the brand. Its CEO, Daniel Riedo, walked the red carpet in the company of Italian actress Cristiana Capotondo, adorned with a Reverso One Réédition. This year’s recipient of the “Glory to the Filmmaker Award”, which Jaeger-LeCoultre annually presents to a film director chosen by the director of the festival, was Iranian Amir Naderi. Moreover, Jaeger-LeCoultre also supports the work of a filmmaker each year as part of the Filmmaker in Residence program, funds the restoration of historical films in China, as well as sponsoring the San Sebastian and Los Angeles film festivals.

Bovet and the 4th Art

Bovet has chosen to lend its support to the Hong Kong Philharmonic Orchestra. During the opening dinner of the 2016-2017 season held on September 8th, guests enjoyed a watch and jewelry runway show presenting collections by Bovet and Peonia Diamonds. The main attraction was the auction – organized by Christie’s Hong Kong – of a one-of-a-kind creation produced in the Bovet workshops. Its dial is adorned with a miniature-painted peony and enhanced with a diamond featuring a peony-like cut donated by Peonia Diamonds. The musical accompaniment was naturally provided by the HK Phil which displayed absolute mastery of its art by improvising on a performance by Wu Tong, one of the rare musicians to master the Sheng, an over 2,000 year-old traditional Chinese instrument.