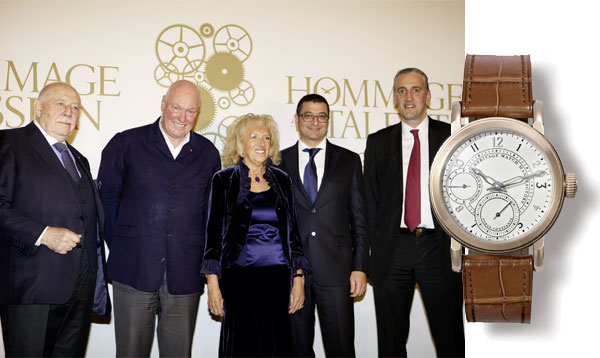 Unanimously acclaimed for the quality of its organisation and its visitors, the SalonQP in London notably welcomed the visit of quadruple Olympic gold medal winner and Corum ambassador Ben Ainslie. Named Sailor of the Year 2012 by the International Sailing Federation, Ben Ainslie (pictured in the centre) was presented with an Admiral’s Cup watch by Marie-Alexandrine Leibowitch, in the presence of the exhibition organiser James Gurney.

During the 4th Forum de la Haute Horlogerie (see the Economy article), Jean-Claude Biver and Giulio Papi were distinguished by the Banque Julius Baer. Its representative (pictured right) presented Mr Biver with the Hommage à la Passion award and Giulio Papi with the Hommage au Talent prize, in a ceremony accompanied by Franca Zigliotto, widow of the journalist Eugenio Zigliotto who initiated this distinction, and Franco Cologni (left).

In 2012 at the Espace Hippomène, it was the Sensus model from the Heritage Watch Manufactory that earned the Superwatch Award at the Geneva Time Exhibition, thereby winning an invitation for the 2013 edition that will take place in the Bâtiment des Forces Motrices. Meanwhile, Didier Decker has taken the reins of the company and the GTE no longer will no longer be organising any competitions, in order to focus firmly on the hospitality aspects of its mission.