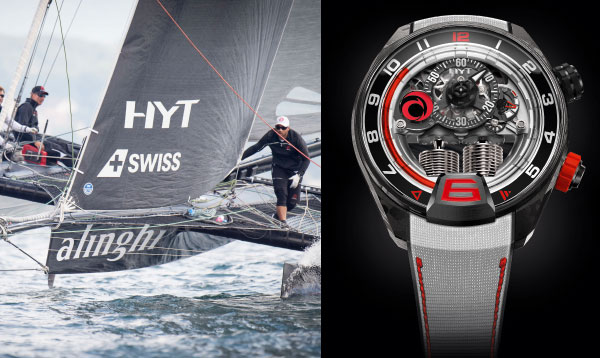 At the helm of HYT, Vincent Perriard adopts an oxymoron-rich approach to Fine Watchmaking by juxtaposing elements generally considered mutually exclusive. This applies as much to associating water and mechanics as to maintaining simultaneous ties with two major yachting figures whose paths never cross on the docksides. HYT in fact sponsors the RC44 Monohull Championships created by Russell Coutts, as well as its D35 Multihull counterpart created by Ernesto Bertarelli. Previously joint winners of the America’s Cup, the two big bosses of the nautical stable now share only the two common denominators : a passion for sailing and HYT! With ten patents to its credit, the hydro-mechanical brand has created a limited series for the two speed demons of hydrocarbon. Wrapping up the D35 season on Lake Geneva, at the Grand Prix Alinghi, Vincent Perriard has just presented Ernesto Bertarelli with the very latest H4 Alinghi, equipped with a mechanical microgenerator-powered light source. Could the next step be to bring these two sailing legends to the same table by getting them to see their relationship in a new light ?
<
>