Richard Mille : Automobile elegance at the height of its art 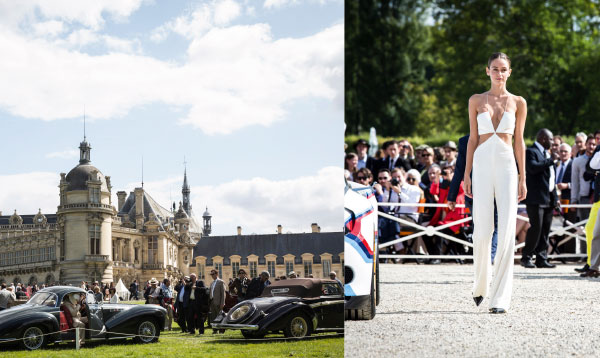 Thirteen thousand spectators gathered on September 6th in the exceptional surroundings of the Domaine du Château de Chantilly for the second edition of the Chantilly Arts & Elegance Richard Mille. Stemming from a partnership between the company from the Jura and Peter Auto, this event, which already made a big impression on the automobile world last year with the big return of the Concours d’Elegance to France, continued its upward trajectory this year. It not only recorded a 35% increase in attendance rate but also won State recognition with the official patronage of the Ministry of Culture and Communication. On this Sunday in the country, family, curious onlookers and enlightened connoisseurs alike had an opportunity to attend three events: the Concours d’Elegance which associated designer clothing companies with the design aspect of concept cars, the Concours d’Etat which judged a hundred cars on the manner in which they have been preserved and their historical worth, and finally the Concours des Clubs, which last year brought together 850 vehicles from around 40 clubs. This year, Richard Mille awarded the “Best of Show” prize to Mr Evert Louwman’s Mercedes 500 K Special Roadster, which was exceptionally allowed out of the Louwman Museum. Following the success enjoyed by this edition, the date of the next Sunday in the country in September 2016 is already firmly diarized.
<
>