Patek Philippe : Living up to expectations 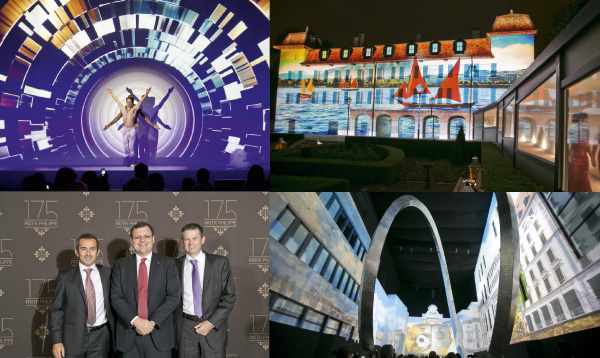 Ceremonies commemorating Patek Philippe’s 175th anniversary lasted an entire week in October, taking place within the premises of the Fine Watchmaking brand most sought after by collectors the world over, as well as in the surrounding area! A spectacular 25 meter-high cubic cocoon was erected all around the esplanade usually used to welcome visitors to the Manufacture, and extended into the inside courtyard. This mammoth temporary construction kept 160 builders and 23 technicians busy for 70 days, using 5,000 linear metres of steel girders and 4,000 m2 of waterproof sheeting. In the course of the six evening events, guests from five continents had an opportunity to admire choreography performed on stage and film screened on the inside walls, retracing the history of the biggest independent family-owned brand. Current CEO Thierry Stern was symbolically handed the microphone and the ‘torch’ by his father, Philippe, and commented on the event while stating that preparations are already under way for the 200th!
<
>