Patek Philippe has always stood out in the production of artistic timepieces, decorated by in-house or independent artisans. It especially distinguished itself in the second half of the 20th century, at a time when ancestral techniques were threatened with extinction. In order to preserve them, it maintained production by giving work to a number of great specialists still cultivating their art. This was a good move because these models featuring rare handcrafts were a success and inspired new vocations. Today, Patek Philippe annually produces some 40 masterpieces, generally one-of-a-kind, including around 15 Dome clocks. The 2015 vintage gives pride of place to feminine motifs paying tribute to skills from Geneva and elsewhere.

A Geneva tradition, the art of enameling occupies a place of honor in the decoration of Patek Philippe Dome clocks, particularly cloisonné enamel which enables the creation of superb multi-colored paintings, on which the motifs are outlined using tiny gold wires and the alveoli are filled with successive layers of enamel. This technique is the basis of this year’s Bee-Eaters model on which birds from this species, randomly scattered, stand out on a pale pink background. The decor enriched with miniature painting and silver spangles surrounds a guilloché dial adorned with translucent flinqué enamel. The stunning Haute Couture model, inspired by precious custom-made painted or embroidered fabrics, is graced with a floral motif and butterflies entirely crafted in cloisonné enamel.

In this French technique used to create the touching scene on the Mother & Child clock depicting these symbolic figures surrounded by cherubs, the enamel serves to color the surfaces of the designs already produced using manganese oxide. To complete the work and model the characters, the craftsman has used white enamel, known as blanc de Limoges, and drawn incredibly fine lines using a needle.

In 2015, Patek Philippe renewed its collaboration with the Compagnie des Cristalleries de Baccarat in order to create clocks known as Crystal Chandeliers, inspired by hand-engraved chandeliers made by the French Maison’s factory. It took more than 70 hours to produce the geometric motifs on the large turquoise-colored one-of-a-kind model (221 mm high), and more than 40 on the small versions (158 mm) of the limited edition in natural crystal. 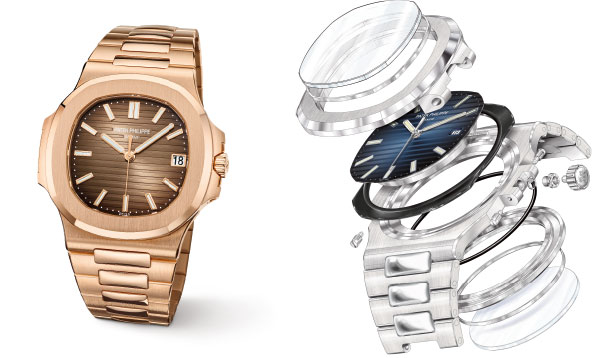