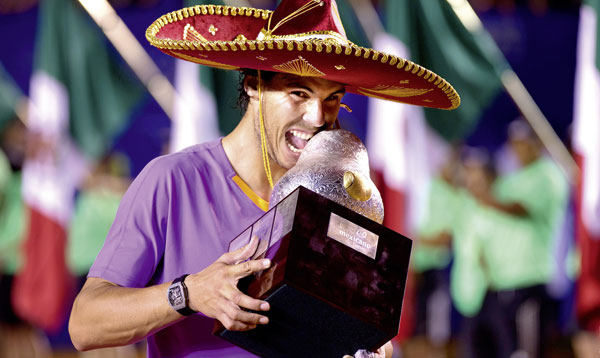 After a seven-month absence due to a knee injury, Rafael Nadal is back on planet tennis and fighting fit. A fortnight after his victory in Sao Paulo (Brazil) in February, the Majorcan won in Acapulco against his countryman David Ferrer in one hour and 6 minutes in two sets (6-0, 6-2). During this tournament, he did not lose a single set and only relinquished his service once (out of 43 service games).With this final, along with the one on March 17th at Indian Wells, Nadal notched up the 53rd title of his career. At the Acapulco tournament, Rafa, partner to Richard Mille since 2010, had an RM 27-01 on his wrist – the world’s lightest watch (19 grams including the strap), presented for the first time in Geneva in January at the SIHH. Its movement is completely suspended in the heart of the carbon case and features a plate connected to the latter by four steel mesh cables with a diameter of just 0.35 mm. This extreme and completely innovative technique allows the calibre to withstand accelerations of more than 5000 G. With the RM 27-01 on Rafa’s wrist, Richard Mille continues to take on new technical challenges and to pursue its constant testing of brand-new solutions in the world of Fine Watchmaking.
<
>