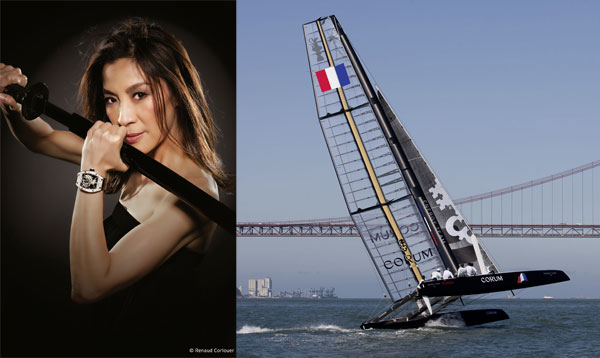 Corum in blue, white and green

Decades of involvement have earned Corum undeniable legitimacy in the world of sailing, and the brand is naturally following the lead of its ambassador Loïck Peyron in his America’s Cup bid by sponsoring the AC45 Energy Team that will take part in the America’s Cup World Series 2011. In parallel, Corum has broadened its sponsoring territory since last summer to include skier Didier Cuche in its team of ambassadors, as well as by becoming official timekeeper of FC Zenit, the St. Petersburg football club. The Corum brand also has a new benchmark stakeholder in the person of its CEO Antonio Calce, who has been leading it to successful new heights since 2007.

Richard Mille in his role as a brilliant catalyser

While movie star Michelle Yeoh’s artistic sensitivity and innate sense of luxury have led Richard Mille to enlist her help in creating a ladies’ watch (the RM 051 Phoenix), the exceptional talent of the world’s best polo player convinced the brand to include Pablo Mac Donough on the roster of the Richard Mille Team of ambassadors. Like fellow sportsmen Felipe Massa, Rafael Nadal and Bubba Watson, the Argentinian player wears a Richard Mille watch, the RM 010 Black Night, during his tournaments. As of 2012, he will be sporting an exceptional model specially created for him and issued in a numbered limited series.