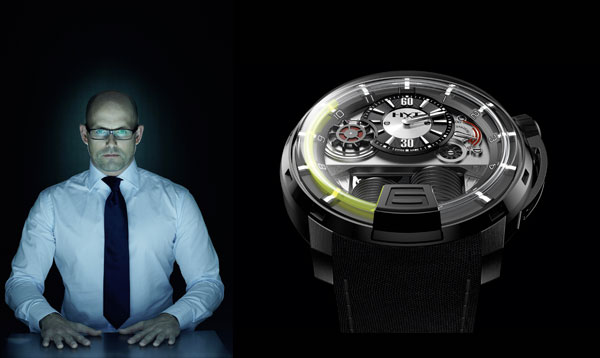 To create a liquid indication of time that is small, wearable and multi-purpose, HYT embarked on a completely new idea: using two flexible reservoirs at each end of a capillary tube. The system is sealed, with each reservoir containing a liquid of a different colour that don’t intermingle. Compressing the first reservoir sends its liquid along the capillary tube to show the time, while the other liquid fills the second reservoir. The two fluids are separated by the positive and negative polarities of the molecules of each that keeps them apart like magnetic repulsion. There’s no need for a piston in the tube. Issues of power supply and space are thus resolved. The basic concept of the future H1 was born. The two reservoirs are at 6 o’clock. When one is emptied, the other fills, and vice-versa, moving the liquid along the tube. As the time goes by the fluorescent liquid advances. The crescent shaped meniscus between the two liquids shows the hour. When the fluorescent liquid gets to 18:00 hours, it flows back to its original position. How are the reservoirs emptied and filled? The secret lies in two extremely flexible and hardwearing bellows made of an electro-plated alloy and driven by pistons.  And the job of the watch movement is to ensure that all this works.

The time is shown exactly thanks to a rectangular capillary tube of 1.7 x 03mm, milled to form a circle between two layers of Plexiglas constituting the watch glasses. The flexible reservoirs, made using unfolding membranes, are trapped in transparent cylinders. The force necessary to push the liquid is transmitted via a cam that moves the piston working the bellows.  The main challenge was to find an interface between the mechanical movement and the hydraulic system in a sealed circuit. For a start, the space available to accommodate both was limited. Next they had to be installed separately to keep each independent, and then made to work together. It was a tricky bit of modular integration, which gave rise to other constraints, like having to assemble the dial in two parts from the sides. At the end of 2011, seven patents had been applied for to protect the technology and one for the design.

Hydraulic power means pressure. When the fluorescein solution has gone right around the tube to 6 o’clock, one bellows contracts and the other expands, generating resistance and therefore a need for additional power. To counter this, Preciflex as developed innovative bellows. Made of a very thin alloy that is both strong and flexible, they are inspired by the measurement gauges used by NASA, but had to be redesigned for use in watchmaking. Their studied shape reduces the amount of energy needed to compress them while absorbing shocks and ensuring that they cannot leak.

THE GENESIS – HYT TO THE POWER OF 6

Just a decade ago, the Swiss National Exhibition, Expo02, took place around the three lakes of Watch Valley inspiring Lucien Vouillamoz with the idea of a hydraulic watch. At that time, this nuclear physics engineer with a diploma in thermodynamics couldn’t figure out how to replace the force of gravity that water clocks or clepsydra relied on, in a wearable and water-resistant wristwatch. Several years later he had the idea of fixing the ends of a capillary tube on ether side of reservoirs in which the liquids are separated by a meniscus that at the same time indicated the hour.

His friend Patrick Berdoz then entered the scene. He’s a serial entrepreneur and business angel with a great deal of experience in intellectual property and launching innovative products. Together they researched for any antecedents and drew up the first technical specifications, designs and preliminary patent applications. The results then looked so promising that Patrick continued to finance the whole project and decided to involve his friend, Emmanuel Savioz. The team then laid the foundations of what was to become HYT.

The meeting in 2010 with Vincent Perriard turned out to be decisive. He had not only had the right contacts and an all-encompassing experience in the watch industry, but he had also made a successful foray into the application of fluids that had earned him the design prize at the 2008 Grand Prix d’Horlogerie in Geneva. As a partner in the venture, Vincent Perriard completes the hard core of HYT with the sector’s leading watchmaking capabilities. Bruno Moutarlier performs the key role of transforming concepts into watchmaking reality as leader of all the development activities. This former industrial manager with Audemars Piguet turned to Jean-Francois Mojon and his team of watchmaking virtuosi at Chronode to make the movement of the future H1, while briefing the engineers at Helbling Technik, pharma specialists, for the hydraulic part. Joining the HYT project as artistic director, Xavier Casals, has been with Vincent Perriard on all his watchmaking adventures for the last 15 years, starting with Audemars Piguet from 1995 to 2000. Finally Ion Schiau became the latest partner in HYT at the start of 2012 to take over the marketing and sales management. He had previously pursued his love of watchmaking around the world, notably for the Swatch Group and more recently for Hublot. At the same time Vincent Perriard entrusted the design of the future H1 to the Etude de Style studio, run by Sébastien Perret. He’s already working on H2, H3 and H4.

Powerful and edgy, the design gives the H1 its energy-charged character. The three dimensions of its architecture are revealed from the front and the sides as well as in three-quarter view by a 5mm sapphire crystal sculpted from a solid block.

Dominating the multi-level dial, the dome at 6 o’clock makes it own rules. From it emerge particles of fluorescein as if suspended in the flow of time. Towards it converge pistons and bellows, eager to perform. As if unstructured, the upper part of the watch dictates a pattern of strata and reliefs. The regulator dial for the minutes is in the centre, straddled by an energetic small seconds indicator that brings a waterwheel suddenly to mind. At 2:30 the 65-hour power-reserve indicator slices the available energy into three arcs. And all the while the fluids follow their journey inside the rim of the case. With a diameter of 48.8mm and a height of 17.9mm, this watchmaking UFO is both impressively light and fits perfectly on the wrist. The slots in the caseband extend the baignoire-style hour markers, while the axis of the movement is denoted by the crown alongside 2:30 as if held there by its imposing crown guard. 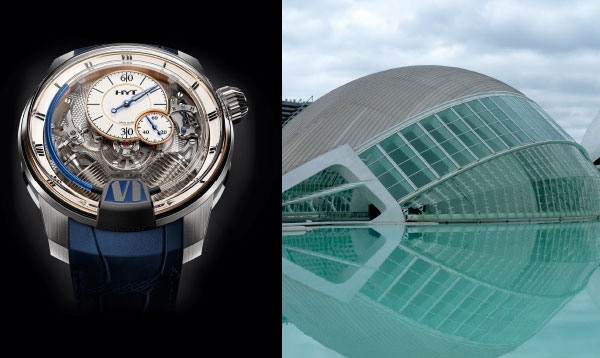 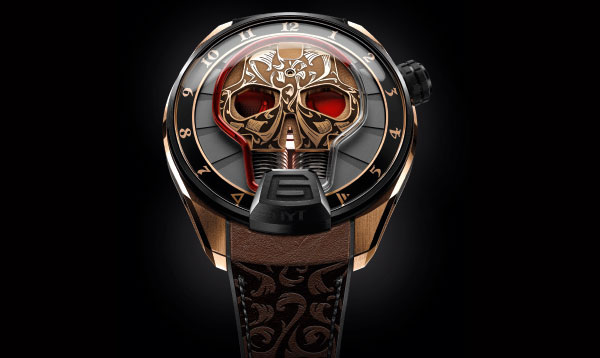 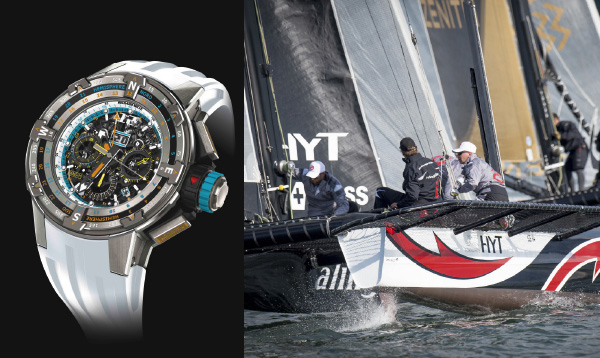