12TH ART : A new chapter in the ongoing saga of the 12th art and classic arts 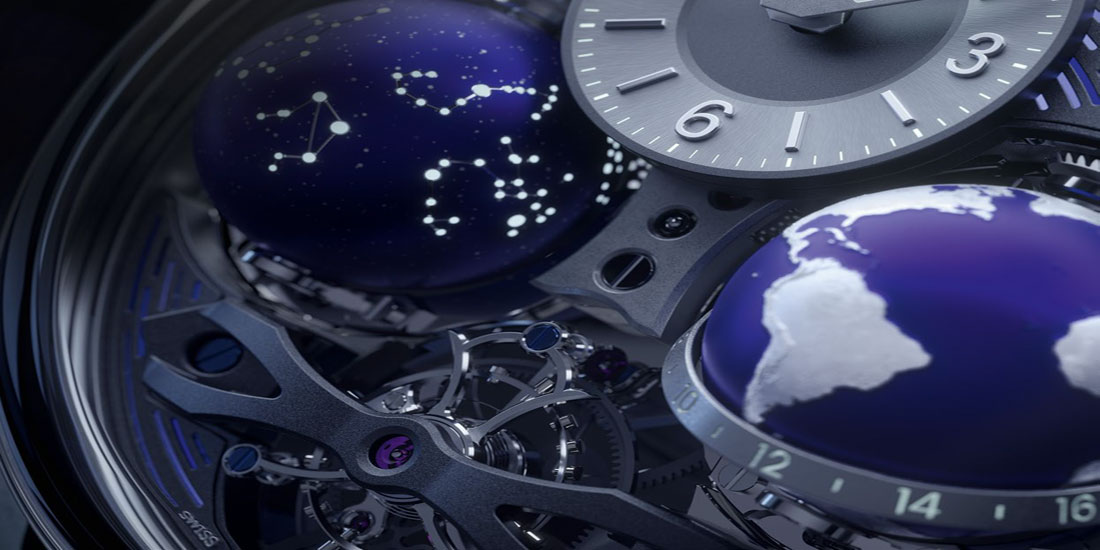 Architecture and Girard-Perregaux Spectacular architecture for a watch that significantly changes appearance at night. Under a strongly domed glass with an astronomical telescope effect, the Bridges Cosmos features two rotating globes visible on the front and back. At 3 o’clock, the globe with hollowed oceans and continents displayed in relief serves as a day-night indicator and world-time display. The celestial globe at 9 o’clock presents the constellations of the zodiac : filled with luminescent hydroceramics, they glow intensely in the dark. Likewise, the sapphire dial that is invisible during daytime offers a timeless view of the sky at night. This 3D scene is complemented by a concave hour-minute dial and tourbillon beneath a large characteristic Girard-Perregaux bridge. 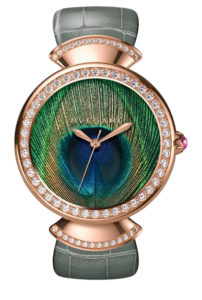 Highly symbolic, notably to embody immortality or renewal, the peacock is back in the Diva’s Dream collection. Strongly present in ancient Roman mosaics, it naturally finds its place at the heart of the watch with fan motifs inspired by those of the Caracalla thermal baths. Its reappearance is particularly poetic : it suggests rather than asserts its majestic stature. We imagine it through a natural feather, focused on an eye, which covers the surface of the dial. With this astonishing “artistic crafts” creation, Bvlgari provides a fine example of its passion for unexpected materials and bright colors along with its inexhaustible creativity as it celebrates its 135th anniversary. 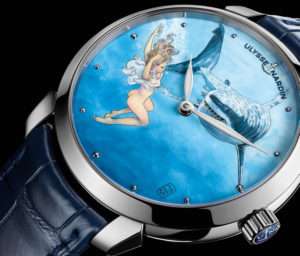 Ulysse Nardin, which has made a habit of turning the spotlight back on erotic watches, has teamed up with the famous Italian comic book author Milo Manara to create 10 sensual Classico Manara watches featuring a woman (Nadia) and/ or a mermaid (Ulyssa) depicted naked in an aquatic environment. Although they jointly tell the story of a romantic encounter, they are each considered self-sufficient. The designer’s original watercolors were reproduced using the ancestral technique of miniature enamel painting in Ulysse Nardin’s workshops in Le Locle. Each model is available in a limited edition of 10 in steel and 10 in pink gold. All are accompanied by a numbered reproduction signed by Milo Manara. 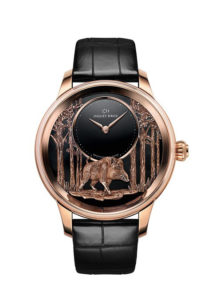 Jaquet Droz celebrates the Chinese New Year with Petite Heure Minute models featuring the animal of the coming year, the pig. Like this creature, people born under its sign are considered faithful and caring. In daily life, they are said to enjoy pleasing themselves and others ; at work, they are regarded as particularly determined and efficient. Two 28-piece limited series of the Petite Heure Minute Relief Cochon – with 28 in red gold and eight in gemset white gold – feature hand-crafted and patinated sculptures : on the front, the pig walks in front of eight oaks, a symbolic number in China as well as for Jaquet Droz ; on the back, it majestically surmounts the oscillating weight of the self-winding movement. 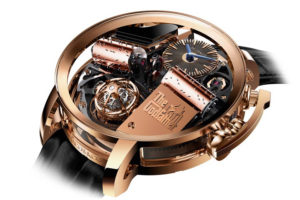 A new pink gold and sapphire case for the Opera Musical Watch dedicated to the film The Godfather, adorned with eloquent decorative elements. While the model features the same piano, Vito Corleone figurine and the winding lever shaped like a violin case (a classic mafia hiding place for guns) as the previous edition, the musical score is replaced by the logo of the 1972 poster. The integrated music box, composed of two cylinders and two 15-blade combs, naturally plays on demand the film’s theme tune, on 120 notes. Adding to the auditory pleasure, the mechanical composition rotates through 120°, including the tourbillon and dial which turns in a counter-clockwise direction in order to maintain the correct reading position. 18-piece limited edition. 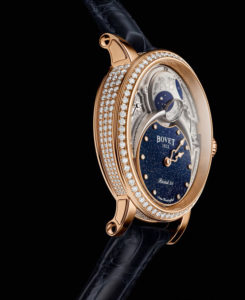 Created in 2016, the “writing desk” case is characterized by a sloping bezel, steadily declining in height from 12 to 6 o’clock, giving way to an original play on volumes and the hierarchy of indications. For its entry into the feminine universe, it adopts a very appropriate oval shape. Récital 23 features a precision moon phase (which takes 122 years to accumulate a one-day deviation), women’s favorite complication, with a particularly seductive choreography : the moon is presented in 3D, in the form of a rotating dome, and performs its monthly dance behind a remarkably elegant overhead window. It overlooks a dial on which the hour and minute hands form a heart when they meet.