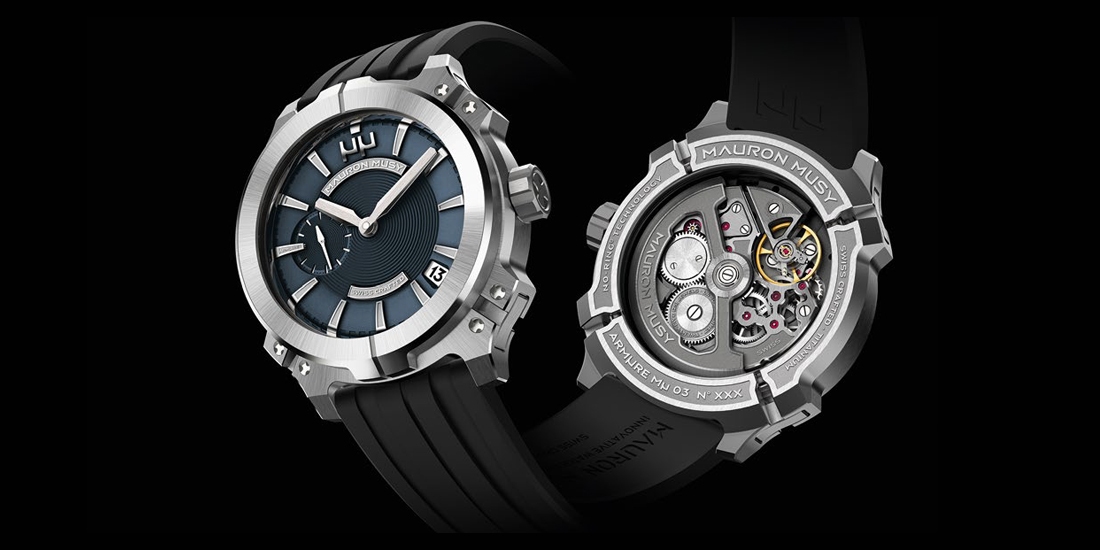 Six years after its creation and about ten models later, the Swiss brand with its DNA steeped in industrial design and mechanical technology continues to expand. For those who may be discovering Mauron Musy (named after the two founders) and its philosophy based on both watch exterior complications and Swiss craftsmanship, it stands out for its invention of the first mechanical direct-seal gasket-free water-tightness technology mechanical sealing system. The patented nO-Ring® technology features mechanical sealing, a clamp brace and a satellite compression spring, of which the combination within a 36-part exterior serves to reduce maintenance costs. An ambassador for Swiss robustness inspired by the Bauhaus movement, the new selfwinding Armure MU03 model in brushed and satinfinish titanium proclaims an all-conquering industrial- driven spirit. Also made in-house, its dial composed of two shield-like superimposed microblasted metal plates is as surprising as its helicopter blade hands. On the back, the exclusive anthracitecolored caliber reflects a desire to ensure maximum visual appeal, with bridges and rotor hollowed and microblasted in the center, satin-brushed or sunburst around the rim, thereby highlighting the script appearing in relief. Switzerland has found its bodyguard, hailing from the Trois-Lacs region.