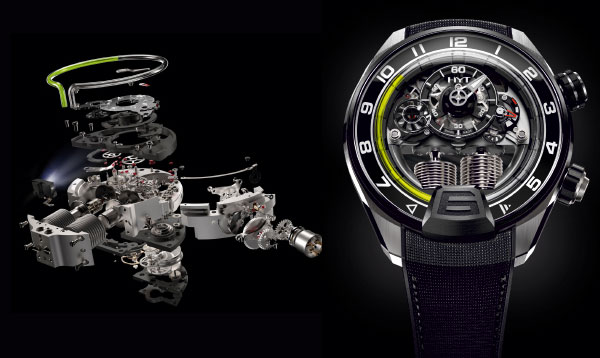 For three years now, the HYT hydromechanical concept has been stirring horological passions, interpreted through more than 20 world-first models displaying the time by means of a colored fluid mechanically pumped through a capillary tube. The avant-garde brand that has filed a number of patents is now introducing an integrated mechanical micro-generator wound via a push-button between 4 and 5 o’clock that bathes part of the dial in light. Strategically sited beneath the rider-tab at 6 o’clock, the two LED lights of the new H4 shine their rays across the bellows, the fluid indicating the time and the skeleton movement derived from the original H1. Unquestionably intended for “enlightened” connoisseurs and other Haute Horlogerie “bright sparks”, the H4 with built-in light source comes in two limited series : 100 in titanium for the Metropolis (above) and 25 in carbon for the Alinghi variation named after the two-time winner of the America’s Cup partnered by HYT (see page 106). The H4 Metropolis also incidentally indicates the hours, minutes, seconds and power reserve !
<
>