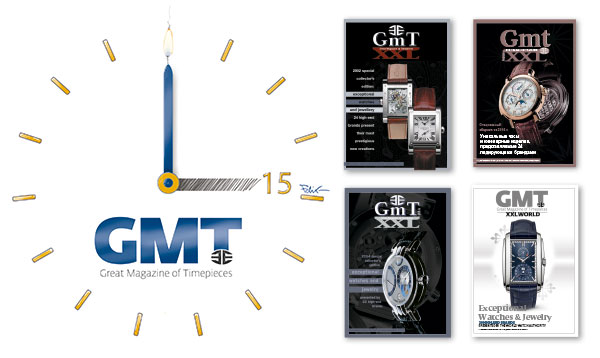 “What could we do together ?” wondered two thirty-something friends with a desire to embark on a joint project at the dawn of the third millennium. In 1999, Pierre Jacques had already made a name for himself in publishing and advertising, having created l’Agenda Etudiant and original billboard networks, while Brice Lechevalier was carving out a career in the leisure industry while satisfying his passion for watches and writing as a correspondent for Montres Magazine. “And what if we launched a watchmaking magazine? There’s nothing really top-class in Switzerland” suggested the budding journalist. “Bingo, we’ll call it GMT” replied the future watchmaking professional. “Good idea, GMT for Great Magazine of Timepieces” added the future editor.

A few innovative ideas for content and distribution later, with a 16-page mock-up in hand and filled with boundless confidence, the two buoyant young entrepreneurs began doing the rounds of opinion leaders in the watchmaking world around the festive season. Two key encounters resulted in a major boost : one with Patrick Cremers, then director of Les Ambassadeurs in Geneva, who was instantly captivated by the concept and passed the message on to the big brands he represented; and the other with Osvaldo Patrizzi, founder of Antiquorum, who agreed to send GMT to 5,000 watch collectors along with his catalogs in exchange for editorial visibility inside.

In parallel, GMT was sent to all Swiss subscribers to the Financial Times, as well as to the 300 best Swiss retailers identified by the two editors in a Who’s Who, who then passed it on to their end customers. A pioneer in this regard, GMT made a name for itself as the first luxury magazine issued free of charge. Appearing at Baselworld 2000 for the first time, it actively targeted watch buyers and high net worth individuals. At the time, nobody had ever offered the retailers, 5 star hotels or the financial establishments a quality magazine to give to their clients. Beautifully designed and published in bilingual French-English and German-English versions, GMT ended up in the hands of high net worth residents and wealthy foreigners when visiting Switzerland, including TAG Aviation clients. The watch boutiques realized that it was a useful sales tool and shared their feedback with the brands who began incorporating it into their marketing budgets. GMT was launched. Sincere thanks to everyone who contributed to this success.

• Launch of the first edition at Baselworld, with a somewhat uncon ventional cover marking the meeting of Roger Dubuis and photographer Denis Hayoun.

• Cartier is the inaugural guest on the cover of the first GMT XXL.

• Launch of XXL USA, with Harry Winston on the cover.

• Launch of XXL Russia-Ukraine, with Vacheron Constantin on the cover.

• First issue of GMT Lady, in xxs format, with Cartier once again as the pioneer.

• The two founders sell their magazine to the Edipresse Group.

• Launch of the GMT franchise in Italy.

• Brice Lechevalier once again becomes a shareholder of GMT, on an equal footing with the Lamunière family (owners of Edipresse).

• With six annual editions, GMT becomes the Swiss B2C  watchmaking magazine with the highest publication frequency, and the only one with an audited print run (REMP certified).

• Production of the official catalog for the Grand Prix d’Horlogerie de Genève, inserted into GMT, which is its official print media partner.

• Contribution to institutionalizing the 12th Art (the art of measuring time), conceptualized by Carlo Lamprecht.

• Creation of the Geneva Watch Tour, which is promoted by Geneva Tourism.

• Patek Philippe on the cover of the first XXL World, the first watch- making magazine to be distributed worldwide (in 80 countries) in the same version.

• The quintessential digital reference guide on watchmaking, WorldTempus, along with yachting magazine Skippers, voile & océan, are incorporated into GMT Publishing.

Great Magazine of Timepieces has become the quintessential watchmaking reference magazine in Switzerland and internationally with GMT XXL World. Brice Lechevalier’s passion and incredible knowledge have played an important part in this, although GMT’s success is also very much the result of teamwork. For Bvlgari Horlogerie, GMT serves as both a communication vehicle and a key influencer among HNWIs and our retailers that is both effective and coherent with our strong growth objective. Happy Birthday GMT  !

Seriously, 15 years already ? In that case, all my birthday wishes to the aptly named Great Magazine of Timepieces ! Great in terms of its exceptional nature perfectly epitomized in the XL version. Also Great in its manner of veering off the beaten track in the domain of Haute Horlogerie. There are professions where it’s tough to set yourself apart from the rest, and GMT is one of the standout players in the field thanks to its highly distinctive identity. So all my best wishes and may the next 15 years be even Greater !

15 years, the age of adolescence and great plans… May GMT remain as generous in terms of its format as it is great in terms of acknowledged talent; and may it continue to enlighten us and stir our curiosity regarding watchmakers “great and small”, while losing nothing of its fresh approach, and above all avoiding any risk of premature aging!

Dear Brice, 15 years means two times seven plus one year, which means you’ve begun a third cycle with GMT. And you do it with a blend of panache, competence, elegance and substance! I warmly congratulate you and wish you many more seven-year cycles of success and happiness. Thanks for being there alongside us and for providing effective support to your readers and to the industry. Long live GMT !

15 years already and a medium that flies high the banner of Swiss watchmaking.

15 years already and a signature of excellence in sharing the watchmaking history of our House.

15 years and more, to write an XXL future.

My warmest wishes of success for GMT !

15 years already and a real institution in Switzerland ! I wish Brice continued success with GMT, in terms of its content, its production and its circulation. GMT has proved able to provide passionate watchmaking enthusiasts with a genuine source of comprehensive and reliable information thanks to in-depth articles and captivating interviews.

In 15 years, GMT has managed to distinguish itself in the highly competitive world of watch publishing by means of first-rate content, superb layout and an innovative, impactful presentation. Congrats and Happy Birthday!

For 15 years now, GMT magazine has been publishing articles on the very heart of the watch industry, steadily accomplishing its work of circulating information on brand development to our customers. I warmly encourage their approach and wish them all the very best in the coming years. I also thank them for their tireless support. Longlive GMT !

In 2000, you asked me if you could come to Meyrin to explain your project, and after our meeting I introduced you to the Scheufele family and to Chopard. GMT has come a long way since then and under your leadership, the title came to life and has asserted itself as one of the Swiss references in the domain. You thought big with GMT, very big with the XXL, but you thought right! Hat’s off to you Brice, and at 15 years old, the magazine has a whole life ahead of it. Long life to GMT !

I remember having the honor of being the first person interviewed by Mr Lechevalier when the magazine was launched in 2000. Since then, I have noted that GMT has brought a distinctive vision of watchmaking, particularly by giving a special place to independent names such as Chopard. The last 15 years have been an amazing journey and I heartily congratulate Mr Lechevalier and his entire team for this magazine that will remain a pleasure to read as time goes by.

We have known Brice since the early days of GMT. Frederique Constant has been part of GMT’s growth over the past 15 years. We have always cherished our collaboration and are delighted to join GMT in celebrating its 15th anniversary !

It is with great pleasure that I extend my best wishes to GMT on the occasion of its 15th birthday. Hearty congratulations and thanks are due for all that the GMT editorial team has accomplished during these 15 years in supporting Fine Watchmaking. May the future be filled with exciting projects and passionately interested readers !

When Philippe Starck holds forth on the subject of time in GMT, he evokes a phenomenon of “extraordinary value, filled with poetry and romanticism. In parallel, looking at a watch without understanding that it is one of the visible indications of time is just mental laziness”.

It is not for nothing that GMT has chosen the premises of the HEAD to celebrate its 15th birthday. While the Haute Ecole d’art et de design in Geneva (University of Arts and Design – HEAD) is indeed inaugurating a watchmaking department, it is above all a symbol of creativity. In its tireless defense of the 12th Art, the art of measuring time, GMT has in the past picked other emblematic locations such as the Musée d’art et d’histoire (Museum of Art and History) or the Centre d’art contemporain (Contemporary Arts Center) to hold this type of event. The editorial team regularly draws parallels between contemporary creations and the classical arts as defined by the philosopher Hegel. The Atmosphere and Innovation sections lend a dimension that transcends the magic of fine mechanics.

While the magazine has since the third issue in 2001 offered its readers a very technical Test Bench section faithfully written by watchmaker Christopher Persoz, GMT also has an entertaining manner of highlighting the various watchmaking professions. By way of example, Zurich-based architect Alex Leuzinger provides input to a section in which he describes the similarities between a watch that our journalist Marie de Pimodan presents to him and the architectural work of which it reminds him. A platform designed as a federating force and to promote exchanges, the magazine of the 12th Art varies its angles to promote Haute Horlogerie and delight its readers, notably by welcoming the opinions of specialists from all backgrounds. Archives available on gmtmag.com.