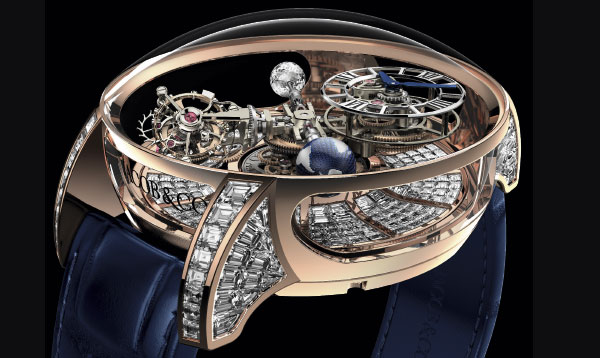 Following in the interstellar wake of its launch into orbit at Baselworld 2014, the Astronomia triple-axle gravitational tourbillon appears endowed with a modified fuselage and now set with 342 baguette-cut white diamonds. Renowned for more than 25 years for the quality of its gemstones, Jacob & Co is also becoming known for its daringly complicated timepieces and their instantly identifiable design. The video that can be viewed on WorldTempus.com perfectly shows the rotation of the three axes and the satellite dance of the four arms featuring 3D tips. The hours and minutes dial spins on its axis to provide a permanent display of the time in the conventional direction, while its own axis orbits the central axis every 20 minutes thanks to an original differential mechanism developed for the Astronomia. During that same period of time, the second axis performs four rotations (one every five seconds), while the tourbillon carriage spins at its own 60-second rate. Fitted along the also-rotating perpendicular axis, the hand-painted titanium earth and the spherical facetted diamond moon change places every minute in an endlessly reported dance. Albert Einstein developed the theory of relativity and Jacob Arabo now exposes that of superlativity.
<
>