JACOB & CO. – In the dragon’s clutches 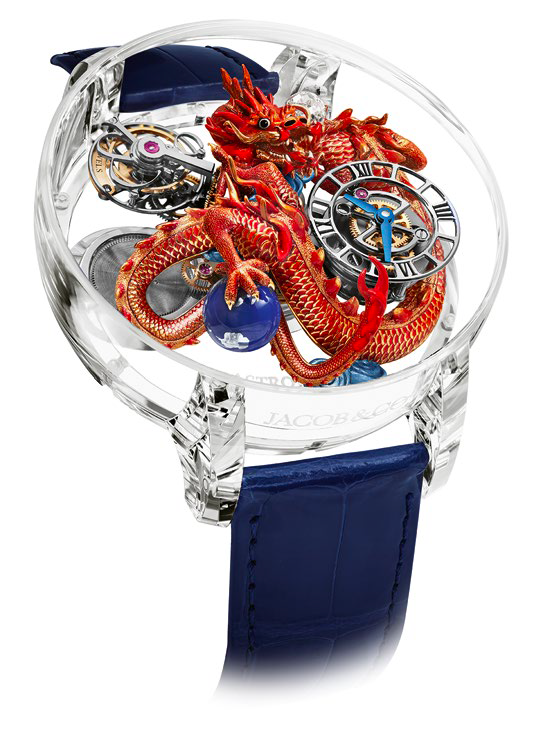 Jacob & Co. is known for its spectacular watches.

Not only are they extremely sophisticated and complicated timepieces, but they also literally stage a show. Anyone lucky enough to see the Astronomia in action is often stunned into silence when observing its cosmic choreography. At each end of the four-armed tourbillon structure sits a tourbillon, an hour and minute dial, a globe and a gemstone symbolizing the moon. Not only do these elements spin on their axis at different speeds, but the entire structure rotates around the dial in 20 minutes. The Astronomia Flawless Imperial Dragon uses the concept of this timepiece, while replacing the cosmic theme with the Chinese symbolism of the dragon. Made of pink gold, sculpted and then painted by hand, the dragon consists of three parts – the head, body and tail – assembled by tiny screws and coiling inextricably around the movement. This extremely realistic undulating posture is further enhanced by precise details relating to the eyes, claws, scales or tongue. The globe is still there, between its claws, as is the 288-faceted Jacob-cut diamond, diagonally placed next to its head. To ensure a 360° view, Jacob & Co. produced a monobloc sapphire case, a feat that required a hundred hours of work.