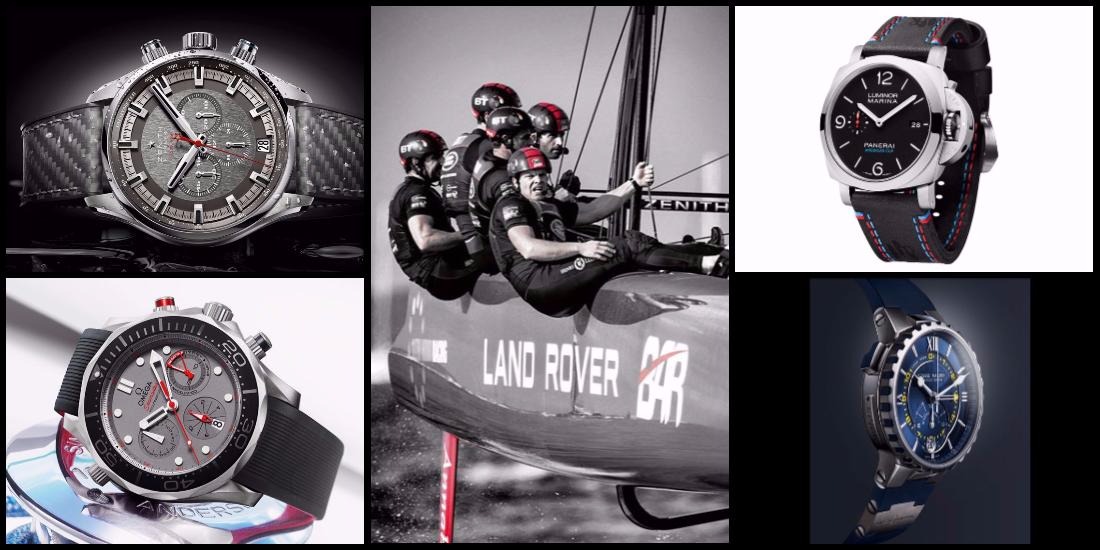 The oldest sports trophy in the world is full of paradoxes. Organized by the American Defender (holder) of the famous silver ewer, the 35th edition (the America’s Cup is held every four years) taking place in Bermuda for the first time will include just five Challengers and the Defender. They will compete wearing helmets on ultra-fast high-tech rigid wingsail catamarans in May and June 2017. Is it the attraction of a breathtaking event or the idea of sponsoring a more accessible America’s Cup ? Whatever the reason, also for the first time, 100% of the teams are sponsored by watch brands, wiht all the big groups represented. Omega (Swatch Group) has remained true to Team New Zealand, while Panerai (Richemont), Ulysse Nardin (Kering) and Zenith (LVMH) will be making their first appearance, along with the lesser-known French brand MATWatches.

Will the last in “make off with the winnings” ? Launched at the SIHH even before the official announcement of the America’s Cup despite the latter’s adherence to strict protocol, the partnership with Panerai is the most ambitious : Officine Panerai is not only the official partner to the America’s Cup but also to the Defender Oracle Team USA and the Challenger SoftBank Team Japan. Behind the scenes in the Cup preparations, there are whispers that the sponsorship of the two teams was offered as a bonus to sponsoring the event, with the latter organized by Oracle, which belongs to American billionaire Larry Ellison, who involved his friend and owner of the Japanese SoftBank telecommunications giant in the event. A masterstroke for Panerai, which on the one hand gives a boost to its brand image already well-known on classic sailing competition circuits, and on the other strengthens its reputation in two essential luxury markets : Japan and the USA. This Italian pragmatism is coupled with record responsiveness in leveraging the partnership – signed this winter – by releasing five models bearing the colors of the three entities. As a result, the America’s Cup logo is engraved on the steel case-back of its official watch that is water-resistant to 300 meters, the Luminor Marina 1950 America’s Cup 3 Days Automatic, available in a 300-piece limited edition. Only the toptstiching on the strap and the engraving on the case-back distinguish it from the 150- piece limited series made for the Japanese team : the Luminor Marina 1950 Softbank Team Japan 3 Days Automatic. Unsurprisingly, the Americans get the lion’s share with a Luminor Marina Oracle Team USA 8 Days, a Luminor 1950 Regatta Oracle Team USA 3 Days Chrono Flyback Automatic in titanium and a Luminor 1950 Oracle Team USA 3 Days Chrono Flyback Automatic in black ceramic, each produced in 200-piece limited series at the Manufacture in Neuchâtel.

ZENITH IN THE SERVICE OF THE CROWN

The brand with the guiding star leaves in its wake the maxitrimaran belonging to the Spindrift Racing stable that it had been sponsoring, in order to capitalize on its partnership with Land Rover, title sponsor of the British Challenger Land Rover BAR, and a favorite for the Louis Vuitton Cup (the winner of the latter will take on the Oracle Team USA in the America’s Cup). Four time Olympic winner and tactician for Oracle in the preceding America’s Cup, English skipper Sir Ben Ainslie is a Zenith ambassador, as is his crew. They therefore all wear the El Primero Land Rover BAR, a 250-piece limited series inspired by the generous (45mm) automatic El Primero Sport column-wheel chronograph, presented by Zenith as the most accurate in the world since 1969.

ULYSSE NARDIN AND ITS MARITIME DNA

The brand was five years old when it saw the launch of the first America’s Cup in 1851. Its history has remained closely linked with marine chronometers. In parallel with sponsoring the Monaco Yacht Show for the past nine years, Ulysse Nardin also partners the Swedish Challenger, Artemis Racing, owned by billionaire Torbjörn Tornquist who lives in Geneva. More athletic by nature, the latter partnership is personalized by the two Ulysse Nardin ambassadors and emblematic members of Artemis Racing : its English skipper Iain Percy, double Olympic gold medalist, as well as Loïck Peyron, a member of the design team and one of the best-known sailors in the world. Together they contributed to creating the automatic Regatta chronograph, equipped with a new Manufacture caliber with a silicon escapement and balance spring, as well as a patented regatta countdown timer (1 to 10 min) with a seconds inverter device, available in three different dial options : white as sea foam, blue as the ocean and black champlevé enamel in a 35-piece limited edition.

OMEGA TRUE TO THE KIWIS

Since its first partnership with Team New Zealand and Sir Peter Blake in 1995, Omega has kept up with the New Zealand crew through all its latest skippers, alternately Challenger and Defender and always finalists. For the 35th America’s Cup presented by Louis Vuitton, in 2015 Omega launched the Seamaster Diver 300m ETNZ, equipped with a column-wheel chronograph featuring a coaxial escapement visible through the sapphire caseback, as well as a 5-minute regatta countdown timer. Flying the colors of the Emirates Team New Zealand, Omega’s watch plays the high-tech sports card with a matt gray case in titanium and ceramic. The 2017 édition of the model for ETNZ is to be unveiled this spring, but was not available at the time of going to press.

French skipper Franck Cammas and his Groupama Team France challenge are equipped by military watch specialist, French brand MATWatches (Mer-Air-Terre). This is the smallest budget in the competition. On the Musto booth at the Paris Boat Show, the racing multihull specialist was presented with the first example of the limited edition 300 Régate Timer GTF, a quartz chronograph with a regatta countdown timer delivered with three interchangeable straps. Which brand will emerge victorious from the Bermuda triangle ?