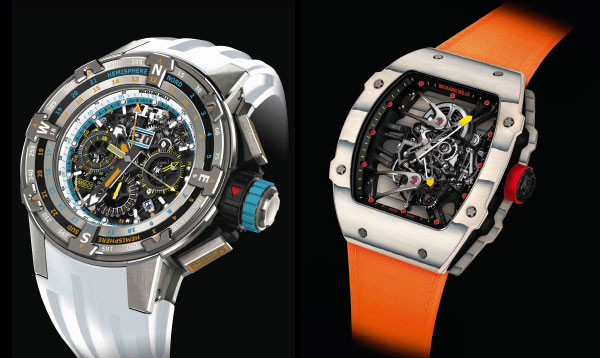 New materials, new records, new styles, Richard Mille’s approach to watchmaking is broader and sharper than ever. It is now combining extreme watchmaking with a new realm, that of ladies’ complications.

Richard Mille’s point of view is that watchmaking must be constantly challenged, both technically and artistically. The RM 27-02 is a new, uncompromising caliber that reinterprets the methods of watch design. While emblematic Richard Mille partner Rafael Nadal vied for his tenth title at the 2015 French Open, the brand unveiled this manual winding tourbillon caliber dedicated to tennis. Following research into NTPT carbon, a material with unique mechanical properties, the brand exhibited the first skeletonized unibody baseplate, in which the caseband and baseplate are but a single piece. This structure, inspired by the chassis of racing cars, enhances rigidity and resistance to impacts.

The baseplate supports bridges in grade 5 titanium with a highly original three-dimensional construction and complex titanium and carbon composition. The movement weighs a mere 3.35 grams. Also used in the RM 27-02, Richard Mille’s engineers have developed a new, original material known as TPT quartz, composed of hundreds of layers of quartz filaments. These fibers possess extreme strength and are inserted between layers of NTPT carbon. The result is, like all Rafael Nadal timepieces, fabulously light. The player himself will carry out the ultimate approval test by wearing the RM27-02 on the court, Richard Mille’s usual trial by fire.

Such demanding conditions are also met by the new RM 61-01 Yohan Blake Limited Edition. A monochromatic evolution of the model dedicated to the Olympic medallist and 2nd fastest man over 100m and 200m, it boasts the RMUL2 caliber. With its skeletonized titanium structure treated with black PVD coating, it provides maximum performance. Its case is made of TZP-N, an ultra-tough black ceramic combining extreme resistance to scratches with low thermal conductivity, and NTPT carbon for the caseband. Richard Mille has aimed for exceptional impact resistance, with validation testing carried out in excess of 5,000 Gs. In this new black livery, the RM 61-01 looks even sharper, just like its inspirer, also known as “The Beast”.

In another field, the sixth edition the Caribbean’s finest sailing race, Les Voiles de Saint Barth 2015, took place in April 2015. Over 1,000 yachtsmen and women of 20 different nationalities, including Loïc Peyron and Terry Hutchinson, competed during a week of racing in an electric atmosphere. A principal partner since its inception, Richard Mille took the opportunity to unveil a special series of the RM 60-01 Regatta Flyback Chronograph, bedecked in competition colours. The timepiece is driven by the RMAC2 automatic flyback chronograph caliber. Designed for competitive sailing, it features UTC functions and a countdown timer as well as a patented locking crown.

This idea of recreating life using mechanical means is almost as old as mechanics. In the 18th century, exquisite miniature animal, insect and flower automata were created to amuse and delight royal patrons around the globe. The new RM 19-02 Tourbillon Fleur epitomizes this tradition in a vibrant expression of watchmaking. At the lower left of the dial on the RM 19-02, a magnolia surrounds a flying tourbillon (Richard Mille’s first ever) with five delicate, hand-made and -coloured petals. Working either in passing or on demand, the flower opens and closes in a delicate ballet. While it opens, the entire tourbillon moves upwards 1mm, as if surging to increase its chances of pollination. Attention to details such as these exemplify the Richard Mille approach to watchmaking artistry and technical sophistication.

Available on the RM07-01 and other ladies models, the brand-new band is shaped like a chain bracelet

Made of gold, enhanced by myriads of diamonds or delicate details, Richard Mille’s ladies collections are richer than ever, and as glamorous as they are technical

The RM 51-02 Diamond Twister is a high jewelry tourbillon that takes its cue from the swirling form of a twisting spiral, a shape found in many organic forms in Nature. The spray of diamonds emanating in fourteen rays from the tourbillon at 6 o’clock can also be associated with the vortex of the Milky Way or a whirlwind (the English translation of the French word tourbillon). Each spiral ray of the RM 51-02 is perfectly set with a single row of diamonds. The case is set with white diamonds, to which black sapphires have been added to sharpen case details, and is fitted with an alligator strap. For ladies in search of a metallic bracelet, Richard Mille has launched a brand new band associated with its quintessentially feminine model, the RM07-01. Shaped like a chain bracelet, it is a vibrant expression of Richard Mille’s dedication to artistic expression in watchmaking, and to femininity.