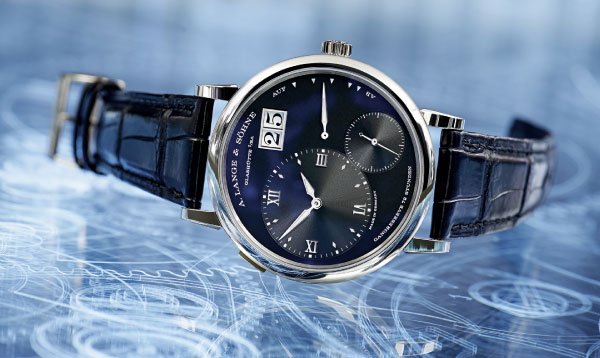 This first test bench article dedicated to a timepiece by A. Lange & Söhne has been eagerly awaited by the editorial team for many years, ever since the Maison from Glashütte established itself as the epitome of excellence upon returning to the watchmaking scene in 1994 after the upheavals of 20th century history. The fact that it immediately earned both popular and professional acclaim is due to the remarkably well-conducted work of rebuilding the brand. Within this context, one simply cannot refrain from yet another of the many tributes paid to the chief mastermind behind this rebirth, Günter Blümlein, whose clear-sighted vision enabled him to give an unexpected new lease on life to German watchmaking.
This involved re-establishing the Manufacture within its historical premises in Glashütte; winning over local custodians of an expertise that they had long since renounced; activating engineering synergies with the other two Manufactures in the group in order to guarantee a swift return to the highly exclusive circle of horological excellence; as well as offering a contemporary watch collection imbued with the signature characteristics of 19th century Saxon watchmaking. The Grand Lange 1, introduced in 2013 and representing a larger version of the Lange 1 that appeared in the first collection in 1994, will serve as a guide for this incursion into the German approach to Fine Watchmaking. Sincere thanks to Les Ambassadeurs who placed this model at our disposal.

Exterior
Some critics use the term ‘austere’ in referring to the interior of German cars. One might prefer the expression ‘quintessentially rigorous’ as far as Lange is concerned. The uniform exterior of the various models by the brand, the sheer understatement of the lines and the decoration, are the almost secret forces serving to forge one of the most elaborate aesthetic accomplishments in terms of balanced proportions and refined details – all in a magnificently simple manner. This typically artistic concept is one to which watchmakers would do well to pay greater attention. In terms of facts and figures, the white gold case of this Grande Lange 1 measures exactly 40.9 mm in diameter – meaning 1.9 mm more than the Lange 1. It is nonetheless 1.2 mm slimmer, shrinking from 10 mm to 8.8 mm. The polished curves of the bezel and case-back embrace a cylindrical satin-brushed caseband bearing the most visible of the many identifying signatures on this watch. The two front and back crystals, naturally flat on such a slim model, are glareproofed on both sides and vanish before the gaze that plunges directly into the anthracite dial surface. While the upper glass seems virtually absent, it finely polarises the light to create subtle nuances in the dial contrasts. From the dial finishes to the satin-brushing of the screw-down back and its engraving, everything about this watch evokes a resolutely contemporary take on Fine Watchmaking as it has been faithfully cultivated in Saxony for over 250 years.

Movement
The movement features the iconic three-quarter mainplate, over which the eye naturally darts from one detail to the next. This new Calibre L095.1 was built to guarantee the perfect proportions of the centrings due to the new case diameter. It has been duly equipped with a barrel ensuring a 72-hour power reserve. The Maillechort of the bridges creates a mesmerising effect and highlights the gold chatons screwed into virtually all of the jewel bearings. The seconds (fourth) wheel and the escape-wheel each have their own bridge and lead towards a traditionally small-sized balance-wheel of which the cock is engraved in accordance with the House traditions. The screw-type balance is dynamically adjusted, meaning that the swan’s neck acts on the balance-spring stud-holder and thereby serves to ensure extremely fine and reliable adjustment of the beat. Finally, the big date mechanism could be held single-handedly responsible for the brand’s success and has nothing left to prove. It is well built and boasts a degree of reliability and precision that can rightly be termed legendary. The Lange Calibre L095.1 is the kind of world that every watchmaking apprentice dreams of exploring.

Tests
The level of movement finishes observed on this model gives the distinct impression that one might expect competition-worthy chronometry or timekeeping precision, and the measurements confirmed this feeling. The winding mechanism has a comfortable space in which to provide an ideal compromise between the resistance of the mechanism and the number of turns of the stem required to fully arm the mainspring. When fully wound, the amplitudes measured are ideally compact, at over 260° in vertical positions and over 280° in horizontal positions. The variations in rate all range between -1 and +5 seconds per day. After 48 hours of operation, the amplitudes loss between 20° and 25° degrees and the variations in rate showed an excellent 7-second difference of between 0 and +7 seconds per day.  The 72-hour power reserve claimed for this model incorporates a comfortable margin of several hours. When worn on the wrist, the Grande Lange 1 proves extremely comfortable and elegant, while providing the assurance of German reliability. It is worth specifying that the model used in this test bench was taken straight from the boutique and was thus not specially ‘tuned for competition’ in preparation for our tests.

Conclusion
Yes indeed, A. Lange & Söhne deserves its status as the epitome of Fine Watchmaking. As this Grand Lange 1 so eloquently testifies, the Saxony-based House embodies a vision of true perfection in terms of technicality, tradition, expertise and aesthetics.