TAG Heuer : Verticalisation to the power of four 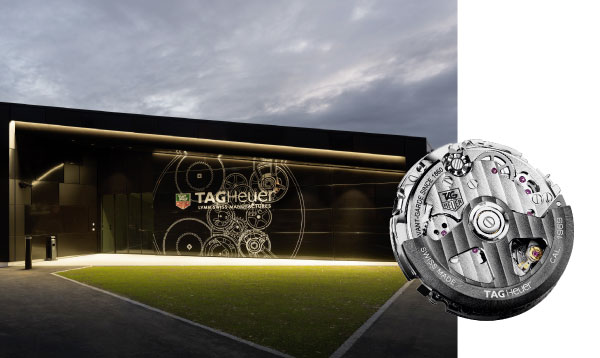 TAG Heuer’s fourth production facility was inaugurated on November 5 at Chevenez, coinciding with the launch of a new Manufacture chronograph movement which will be made there : Calibre 1969.
The industrial effort in which TAG Heuer has engaged to verticalise its production has intensified with the implementation of the new Chevenez site, erected in the Jura a year after the start of the building site. This high-tech 2600m2 area already employs 60 people, to which another 40 will be added between now and 2015. The ten million francs injected into this facility contribute to a 40 million investment made by the company created by Edouard Heuer in 1860 to remain master of its own destiny in the realm of the component supply. After having integrated a production workshop for bridges and discs for mechanical movements in 2009, in 2010 TAG Heuer created two assembly lines at its main site in La Chaux-de-Fonds (devoted to Fine Watchmaking and the Calibre 1887), and then in 2011 acquired high-end dial manufacturer ArteCad. Already the owner of a case manufacturer since 2004, the brand now possesses the main components required to assemble a watch.
Located close to Porrentruy and the French border, which constitutes a large labour pool, this new production facility enjoys the benefit of the most recent technologies – to  the extent that the current rhythm of production of 50,000 movement blank kits per annum will double in 2016. Driving this increase, the Calibre 1969 is already designed to accommodate various additional modules, reflecting the intensified collaboration between designers and industrialists initiated by the design of the avant-garde Manufacture. Inspired by Audi’s production organisation, the Chevenez facility consists of a tooling design workshop, a methods and industrialisation department, a quality and traceability department, a logistics and production plan control department, as well as an integrated maintenance department.
Modular despite being focused on single task procedures, the brand-new dry-running machines operate 24/24 six days a week and are capable of an accuracy within 3 microns. Amongst other innovations that characterise this ultra high-performance site, the 3D microscope capable of analysing micro-flaws in components such as a 0.6mm screw thread ; andr an optical recognition robot designed by TAG Heuer to position movement jewels in their pallet-stones the right way round at high speed, deserve a mention. If one considers that a movement requires an average of 250 stones and that the weekly setting rate can amount to around 70,000 jewels, the increase in productivity and quality (outperforming the inevitable fatigue of the human eye) is significant. Quality controls are conducted both randomly and systematically according to the various production and assembly stages, by skilled operators and high-qualityoptical machines checking parameters such as diameter, depth and hardness. The next step? Laser-performed movement decorations such as Côtes de Genève motifs. Calibres 1887 and 1969 automatic chronograph calibres have a bright future ahead of them.
<
>