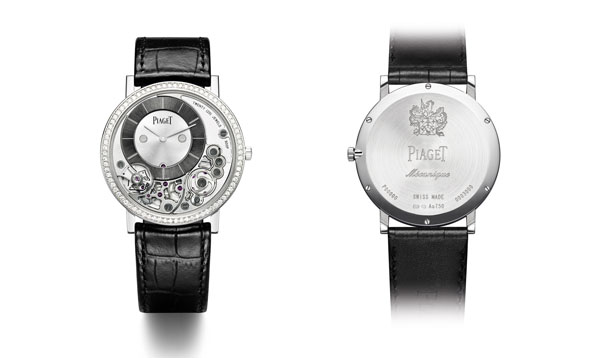 Historically speaking, Piaget was a movement producer before becoming a full-fledged brand in 1943 and carving out a unique place for itself in the watchmaking world thanks to its legendary mastery of ultra-thin horology and of jewelry under the visionary guidance of Gérald and Timothée Piaget. In the 1960s, the virtuosity of the watchmakers at the Fabrique (as the Manufacture in La Côte-aux-Fées was known at the time) was such that they afforded themselves the luxury of fitting ultra-thin movements inside 20-dollar coins with a secret opening. This talent was rapidly acknowledged around the world and enabled Piaget to become one of the leading watch companies and to find its place among royalty and showbusiness celebrities. For its 140th anniversary, the Altiplano P900 that we tested pays tribute to the generations of watchmakers who contributed to forging the Piaget legend, and admirably confirms its stature in facing a future that looks set to perpetuate its identity for many decades to come.

This column generally analyzes the exterior and the movement in turn, but in this particular instance the Piaget technicians have achieved the extreme thinness of the Altiplano P900 by merging the exterior with the movement, making it impossible for us to deal with them separately. The various movement components are placed directly on the caseback that also serves as the mainplate – a trick incidentally reminiscent of a certain plastic watch launched in the 1980s. The comparison stops there, however, since the purpose, the technical solutions and of course the quality of execution are worlds apart. This genuinely innovative solution enabled the Piaget watchmakers to set the record for the world’s thinnest mechanical hand-wound watch – a feat that required extreme precision and ultra-narrow tolerances. The gold caseback/mainplate must thereby meet specific technical and aesthetic criteria that are sometimes extremely hard to combine. One has only to think of the ductility of gold or the difficulty in assembling a movement on a decorated caseback…

This type of construction also implies inverting the position of the hand-fitting, since the bridges are thus directly visible through the sapphire crystal. While this saves an impressive amount of space, the Piaget technicians also made a remarkable job of the movement architecture and the height provided for each component. The movement is mainly arranged around the outer rim of the hours and minutes display area, accordingly off-centered at 10 o’clock. The endshakes and their tolerances are incredibly small, as is the thickness of the wheel plates measuring a mere 0.12 mm – equivalent to a single hair’s breadth !

The aesthetic of this Altiplano P900 visually reflects the overall entity achieved by establishing this symbiosis between the movement and its case. Two colors strike a contrast that magnifies the ingenious nature of this ensemble. The rhodiumed moving parts echo the white gold of the case and stand out clearly against the backdrop of the magnificently black-coated skeletonized bridges. The extreme overall thinness of the movement corresponds to just 3.65 mm and makes a perfect match with the 38 mm diameter of the case, representing perfectly balanced proportions entirely in tune with current standards.

Given the many interactions between movement components, any modifications that are made to a complex mechanical assembly automatically involve a compromise. An action favoring one criterion is thus generally detrimental to another. A movement that is skeletonised or ultra-thin – or both in this instance – means that the watches it drives cannot compete in the same precision timing category as traditional movements. We naturally bore this in mind in undertaking our traditional battery of tests.

Despite a crown sized to match the watch, winding is extremely smooth and free, requiring no special dexterity. Representing another compromise, the diminutive overall size does not enable ultra-thin movements to store the amount of energy required to guarantee massive power reserves. Piaget officially announces an approximately 48-hour power reserve. The use of the word ‘approximately’ generally means that the measurements conducted are often somewhat below the stated figure. The two power-reserve measurements taken were in fact both slightly over the 48 hours appearing on the technical specifications, which is a small feat in itself – and all the more remarkable in that the balance wheel oscillates at a frequency of 21,600 vph.

Having noted the small size of the balance wheel, which generally implies lower inertia, we were not expecting the chronometric measurements recorded. Given the power reserve and the ultra-thin status of the watch, we measured the rates and amplitudes at full wind and after 24 hours of operation. Taking account of the ultra-thin nature of this watch, the results measured are undoubtedly the most impressive we have ever observed in this column. At full wind, the rates in five positions fall within the range of +1 second/day and +8 seconds/day, with a difference of 6.9 seconds. A result worthy of chronometer certification! As for the amplitudes, they all come within a range of 270° to 306°, meaning a maximum difference of 36°.

After 24 hours in operation, the rates range from 0 second/day to +11 seconds/day, with a maximum 10.6-second difference. The amplitudes were all measured at between 233° and 275°.

In addition to the remarkable absolute values, it is the extremely close nature of the results observed in both rate and amplitude measurements that is simply stunning.

It goes without saying that wearing such a timepiece is a true pleasure. We nonetheless added a slightly unorthodox test that is not generally performed. Ultra-thin and skeleton movements tend to be subject to overbanking due to their very thinness and the tolerated endshakes. Simulated abrupt movements along several axes and at various degrees of winding did not trigger this flaw, nor even the slightest knocking at full wind – thereby proving that the Piaget watchmakers have successfully secured this movement.

The sleek proportions of the Altiplano P900 make it the epitome of elegance through its extreme thinness while remaining resolutely “virile” despite modern aesthetic standards that tend to heighten the ambivalence of these two criteria. Above and beyond the absolute value of this new reference, we particularly salute the Piaget management for succeeding over recent years in repositioning the brand in its true field of excellence. The Altiplano P900 provides a supreme expression of this approach by paying tribute to 140 years of expertise while innovating in an entirely legitimate manner. If the thinness of a watch is a decisive criterion for certain devotees of Haute Horlogerie,  Piaget is undoubtedly the brand they are looking for.