A rich vein of new materials 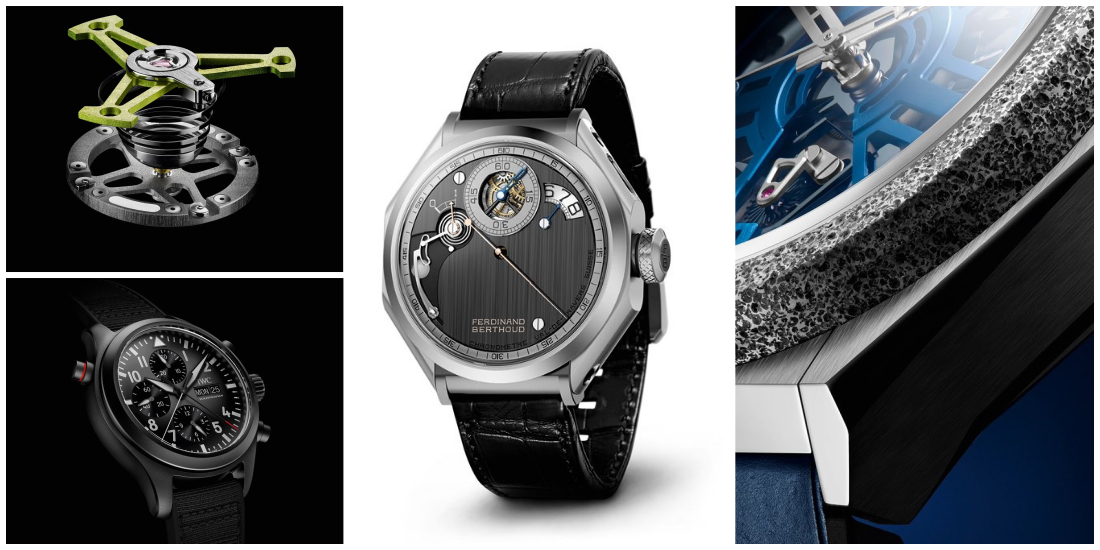 Reinvigorated by a new expansion phase, watch brands are currently feeling emboldened to introduce all kinds of innovative materials, driving what appears to be an inexhaustible and ever more high-performance field of endeavor.

Innovation in terms of materials is a fundamental component in the creation of new watchmaking products. For around the past 15 years, the steel-gold-titanium triumvirate has been steadily enriched by welcoming materials that would never previously have been envisaged. In particular, ceramics and composites have become increasingly important and all the more conspicuous in that they enable exceptional performance. The last 12 months have brought a new wave, mostly used to produce watch cases. The latter are the most visible and distinctive part of watches, as well as the heaviest and most exposed. Which explains why composite materials are so popular, since they are increasingly lighter and scratchresistant. Due to their composite nature, i.e. composed of several distinct materials – not fused as in an alloy – they are able to maintain the characteristics of each element. Yet their structural properties are not their only advantage, as they also feature certain aspects that appeal to designers.

Many products combine carbon black with other colorful ingredients. Hublot weaves blue fibers into its skeleton Spirit of Big Bang Tourbillon, while Ulysse Nardin uses Carbonium, an extremely rigid material widely used in aviation and featuring a high proportion of long-fiber carbon. When mixed with gold fibers, as in the Skeleton X, it takes on a precious moiré appearance. GirardPerregaux is counting on a blue effect with its Laureato Absolute Chronograph. The case made of Carbon Glass benefits from the extreme rigidity of this material, provided by its matrix in ultrahard resin as well as glass fibers, a traditional component of composites. Plus it can be colored at will. Finally, Zenith has opted for maximum lightness with its Defy Inventor : its bezel is made of Aeronith, an in-house developed material made from aluminum foam stiffened with a polymer.

Invention is not the only approach to innovation. Finding applications for known materials can also be equally successful. By way of example, the Kolsterising (hardening) technology that Ferdinand Berthoud uses for the case of its Chronomètre FB 1R.6 consists in modifying 20 microns of the metal’s surface by enriching it with nitrogen and carbon via a diffusion process – thereby making it more resistant to both shocks and abrasion. IWC Ceratanium is a specific titanium alloy of which the surface layers have been transformed into ultra-hard ceramic. These applications become especially fascinating when it comes to such a versatile material as carbon. Depending on how its atoms are arranged, the latter can indeed have radically different characteristics, and TAG Heuer has found a new outlet for this essential building block of organic of life. Stemming from the brand’s fundamental research and manufactured in-house, the hairspring of the Isograph regulating system is made entirely and exclusively of carbon. Its exclusive hexagonal structure guarantees perfect shape memory, exceptional lightness and plasticity that combine to provide excellent impact resistance. It is also naturally insensitive to magnetism and temperature variations. Finally, its production method allows total freedom in the creation of shapes, resulting in a unique geometry that facilitates concentric development of the hairspring, a major condition for its operating precision.

We have taken a closer look at the new materials highlighted in David’s article on WorldTempus. Scan the QR code below and you will find a selection of our articles on carbon- fiber composites, including a detailed explanation of TAG Heuer’s ground-breaking new carbon-fiber hairspring and a report on innovation in the techniques for producing carbon-fiber composites. The carbon-fiber watches of the future may well be knitted, rather than layered and baked. And this is just to consider one innovative material among many others, as watchmakers continue to push the boundaries in their search for new case materials. I’ve recently seen a watch case and dial made from parts of a whisky barrel. Sláinte, as they say in Scotland !