Above and beyond the automobile metaphor 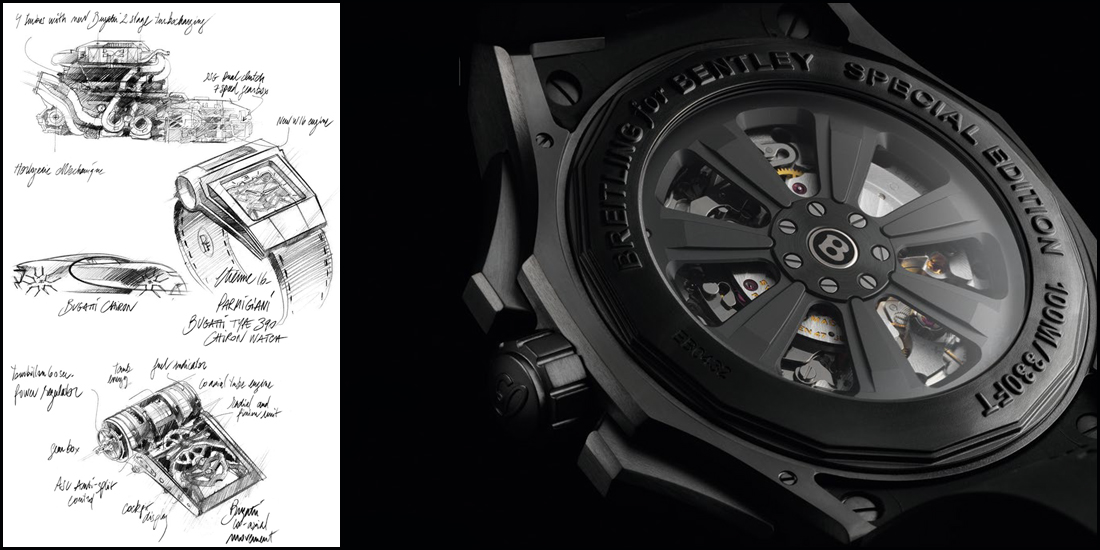 The mechanical similarities between cars and watches forge a natural bond between the two worlds. These ties are deeper and more fascinating than mere name-based partnerships.

There are countless examples of co-branding initiatives between watch and car brands. Simply placing two names on the same banner is a very tenuous link, yet the kinship between the two worlds is far more substantial and encompasses aesthetic, technical and functional aspects, to the point where some strongly committed brands are involved on all three levels – not to mention Rebellion which has its very own racing team (see the article).

Some watches are authentic automobile metaphors, appropriating specific shapes and components with the aim of appealing to keen car fans. The HM5 by MB&F literally looks like a vehicle, including rear exhaust pipes, possibly a Lamborghini given the louvers on its case top. Parmigiani has based the design of its latest concept watch on that of the new Bugatti Chiron. The inspiration may influence more discreet components such as the wheel rim-shaped oscillating weight featured in the Breitling for Bentley collections. Or it may appear in the form of a movement finishing, as in the horizontal openworking used by Chopard and strongly reminiscent of engine design. Meccaniche Veloci has designed a piston-shaped case and accentuated the analogy by adorning it with a stippled or circular-grained pattern favored by both watchmakers and mechanics. Other equally widespread automobile touches stem from dashboards and their speedometers that are echoed in a number of unmistakable shapes and details on watch dials : numerals in italics or with modern fonts, a red zone between 9,000 and 12,000 revs/minute… oops, per hour. Above and beyond aesthetic factors, the material that reigns supreme in motorsports has also carved out a definitive place for itself in watches, since carbon fiber has become increasingly popular and is now used on dials, cases and straps.

Profoundly influenced by the world of classic racing, Chopard adopts more than just visual language from the automobile world. Not only does its L.U.C Engine One feature a power-reserve indicator resembling a petrol gauge and a movement reamed like an engine block, but it actually borrows a construction principle from car-making. Its caliber is mounted on “silent-blocks” (aka chassis mounting rubbers or rubber bushes), which serve as shock-absorbers. A number of automobile technologies have also taken their place aboard watch cases, although few may realize that the opposite also occurs. The clutch appeared first in chronographs before being equipping gear boxes, and the latter were in fact modeled on the going train of a watch which reduces force so as to facilitate accelerations.

Cars and watches also meet and mingle in the noblest of territories : that of complications. The chronograph is often referred to as the function most suited to this sport, but it is too versatile to be truly specific. Specialists thus set about creating mechanisms designed to serve their purpose whether at the wheel or alongside the track. Richard Mille has driven mechanical watchmaking beyond its comfort zone by incorporating acceleration sensors in its watches. The RM 36-01, developed in cooperation with Sébastien Loeb, is equipped with the G-sensor complication. This adjustable acceleration meter serves to measure the intensity of speed variations in any direction. Meanwhile, Audemars Piguet has made the most of its partnership with Michael Schumacher, who co-developed a watch designed to meet his requirements. As its name implies, the Royal Oak Concept Laptimer displays the time required to complete a given lap, memorizes it while timing the next lap and so on, as often as required. With hindsight, one cannot help wondering why nobody had ever thought of it before. But communication within families – even mechanical ones – is naturally sometimes imperfect.