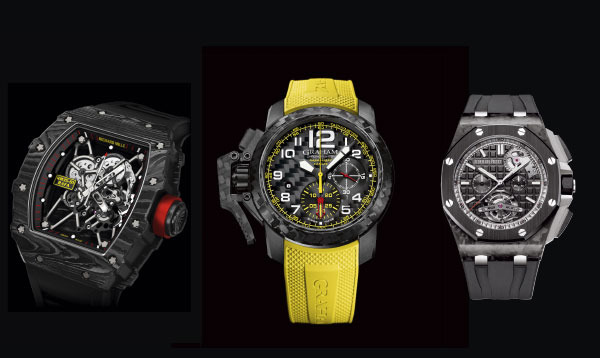 There has been carbon in our watches for a very long time. Indeed, without it, there wouldn’t be any steel. Equally, there has also been carbon on the surface of our watches for a very long time. Coatings such as DLC or A-DLC are made of it. Their anti-abrasive properties come from their Diamond Like structure, which is similar to diamonds. These layers that blacken and harden cases demonstrate carbon’s principal property : it can be shaped and put together in different ways. Carbon can also be used in another form for more technical purposes. Its nanotubes are miniscule, at the nanoscale, and resemble rolls of light wire mesh. Both very robust and flexible, they serve as an additive to plastic or polymer materials. Like sand in concrete, they bring robustness to the party. Richard Mille uses them as reinforcement in making the cases for a number of his models, such as the RM27-01 Nadal. The nanotube is becoming democratized, since relatively inexpensive models such as the Graham Chronofighter Superlight Carbon use it. The main feature that attracts the brands is that carbon is super light.

The weight/strength ratio of epoxy has been used for a long time in a material whose use has become commonplace, namely carbon fiber. Carbon atoms are arranged in long strings and plaited to make a fabric that can be shaped as desired. This is generally used to cover dials, bezels and even the cases of our watches in certain instances. Franck Muller, IWC and Giuliano Mazzuoli use it occasionally. Hublot makes extensive use of it and has even bought up its supplier, which is now part of the Manufacture. The final crucial yet little-known stage consists in glazing the fiber with a resin or polymer solvent that serves to harden carbon, set its shape and protect it. Because despite being all-carbon, a fiber remains a fiber. Not as fragile as wool, but fragile nevertheless. Audemars Piguet realized this through using it. Its forged carbon had placed the Manufacture from Le Brassus streets ahead. Molds were filled with bits of cut fiber, which were then vacuum fired at a secret temperature. When they emerged from this process, these cases required no more than a trim before being sent to the casing-up workshops. Over time, however, they tend to fray on the surface, almost like pilling.

Meanwhile, carbon as a solid material has undergone incredible progress. Entire cases are now made of it. Light, rustproof, anti-allergy, antimagnetic, black, scratch and warp resistant: its qualities are multifold. Several brands use the same approach under different names : piling very tight layers of fiber on top of each other, running in different directions, fired with secret additives depending on their personal method. They can be recognized by their appearance, reminiscent of tiger sharkskin with its irregular lines, or a piece of veined wood. At Richard Mille, it is called NTPT and comes from the sails industry. At Panerai, it is called Carbotech. Hublot has no special name for the material from which the new Classic Fusion Minute Repeater is made. But this watch illustrates one of the lesser-known advantages of carbon, which Hublot is the only company to exploit and with audible success : it conducts sound with incredible efficiency.

The fact remains however that this winning formula also has its weak points. While steel is ‘merely’ dented by impacts, a blow to carbon will break it and it may even tear. The result is that cases made of fibers produced in the same way as in the automobile or F1 world are rare and are often protected by harder, typically ceramic bezels and flanges. Finally, there’s also a price issue. DLC has become commonplace and fiber coatings have become popularized. As a consequence of the novelty of the technology and its unquestionable technicality, a case made of 100% carbon costs anything from 40 to 70% more than a non-precious metal.