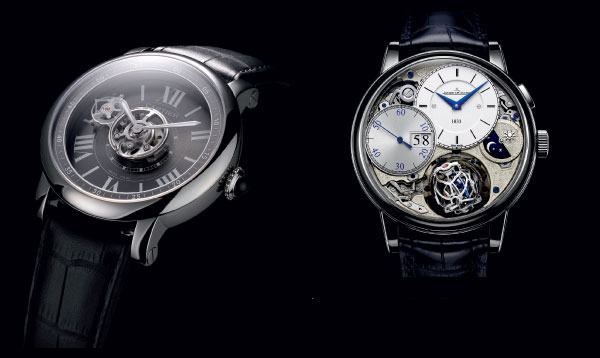 The development of a grande complication model, traditionally a watch combining a chronograph, a perpetual calendar and a striking mechanism, is an exercise at which a. Lange & söhne had not yet tried its hand. For this fi rst attempt, the German brand presented a superb accomplishment. The monopusher chronograph is equipped with a split-seconds hand and with the much rarer jumping seconds hand. The latter additional function enables readings of the measured times to the nearest fifth of a second. The perpetual calendar comprises a display of the date, days and months over an original four-year cycle and moon phases; the striking mechanism is extremely sophisticated with Petite and Grande Sonnerie and the movement as a whole meets the highest quality criteria of the Manufacture.

Through its ID concept watches, cartier provides innovative solutions in the quest for precision. In 2009, the ID One was the first mechanical watch to run almost perpetually with no need for lubricants or adjustment. This performance is achieved by micron-level production accuracy, an optimal shape of the regulating organ and the use of cutting-edge materials. It has now given rise to the Astrotourbillon Cristal de Carbone equipped with a tourbillon that spins around the dial while pointing to
the seconds. Everything possible has been done to reduce sensitivity to temperature fl uctuations and to magnetic fi elds, as well as to friction: a niobium-titanium case, a lever and an escapewheel requiring no lubrication and no adjustment, tungsten carbide pivots as well as carbon crystal bridges.

The Master Grande Tradition Gyrotourbillon 3, introduced to mark the 180th anniversary of Jaeger-Lecoultre, comprises the first fl ying-type spherical tourbillon which has no upper bridge. It is more clearly revealed than ever with an aluminium carriage featuring a surface treatment that enhances its refl ection of the light. The blued 14-carat balance is combined with a surprising balance-spring. After the cylindrical balance-spring of the Gyrotourbillon 2 comes a spherical balance-spring equipped with two terminal curves and guaranteeing even better precision-timing performances. The stunning movement also comprises an harmoniously integrated instantaneous digital-display monopusher chronograph, omega has announced the creation of the fi rst authentically anti-magnetic watch movement. Up until now, the problem of magnetism had been resolved by the use of a movement protection capsule. Such a solution is not only limited to fi elds of 10,000 Gauss maximum, but also unattractive in that it prevented any view of the components. Omega’s new option is based on the use of non-ferrous materials in the very composition of the movement, including notably silicon, nickel phosphorous and zirconium-based liquidmetal. All of which means that the calibre can withstand up to 15,000 Gauss (1.5 tesla) and has been fitted inside a watch featuring a date window and a sapphire caseback, the Seamaster Aqua Terra.

At Richard Mille, the new Rafael Nadal tourbillon watch, the RM 27-01, takes the concepts of resistance and lightness to new extremes. The movement appears to be suspended at the heart of the case. Its mainplate is linked to the inside walls by four steel mesh cables measuring just 0.35 mm in diameter and held taut by a series of tensioners and pulleys. This structure enables the watch to withstand accelerations of up to 5,000 Gs. The calibre weighs just 3.5 grams thanks to the use of titanium (for the mainplate and tourbillon carriage) and aluminium-lithium (for the barrel bridges and gear trains). The watch as a whole weighs just 19 grams with its polymer case injected with carbon nanotubes and its Velcro strap.

Roger Dubuis defi es gravity with the Excalibur Quatuor, the first watch equipped with four sprung balances to compensate for variations in rate due to changes of position. A technical feat and a new solution which acts instantaneously, contrary to a tourbillon carriage with its one-minute rotations. Since the balances do not oscillate simultaneously, the customary 4 Hz frequency amounts to 16 Hz and thus ensures enhanced precision. The creation also incorporates an unprecedented power-reserve indicator and no less than fi ve diff erentials. It is issued as an exceptional three-piece in a silicon case, in parallel with an 88-piece pink gold edition.

The new UR-210 by Urwerk live in step with their owners thanks to the winding-effi ciency indicator at 11 o’clock. Contrary to a torque indicator, this unusual display does not show the tension of the mainspring but instead the ratio between winding and actual energy consumption. In other words, it signals to the wearer the degree of energy being delivered to the moment and whether or not it is suffi cient according to whether he is active or resting. A hand moves towards the green or the red zone depending on the situation and it is possible to intervene via the regulator on the back of the watch. Winding is optimised in the “Full” position, whereas in “Reduced” position a system governing system kicks in to slow down the operation of the oscillating weight. The automatic winding may also bedeactivated in “Stop” mode.