Who doesn’t have their own movement ? 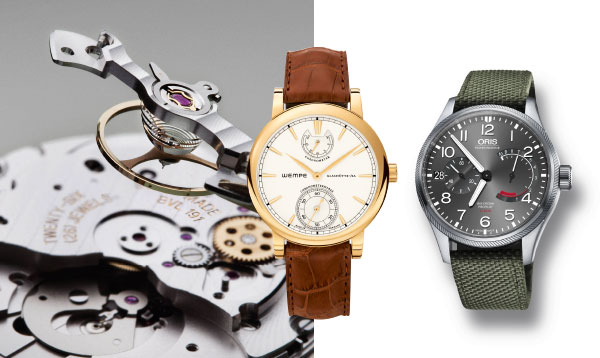 The retailer and watchmaker Wempe ordered the exclusive movement of its Chronometewerke Power Reserve from MHVJ.

For many decades, the entire watch industry basically drank from the same wellspring. Whatever their degree of prestige, dozens of brands sourced their movements from the production companies of the Swatch Group juggernaut. Since that particular stream has dwindled to a trickle, brands have had to find new solutions. Some continue to use generic calibers, either from the Swatch Group for those who have maintained good relations with its ETA subsidiary, or from Sellita, the company that has succeeded in cloning ETA calibers. Meanwhile, others are increasingly resorting to movements that are new, sometimes exclusive, or better still developed and produced in-house. These new-generation movements are basic. They must remain within the usual price limits of the brands launching them. But once engaged in such a lengthy and costly operation, the latter tend to add a little something extra into the mix. The current trend is to endow these calibers with a substantial power reserve.

The words “caliber” and “exclusive” automatically spark thoughts of another French term: “manufacture”, whose all-encompassing ambiguity is still leveraged by brands. It is worth recalling that, strictly speaking, a “manufacture” caliber is developed, produced and assembled by the brand that uses it. But in fact any mechanical movement is manufactured in the etymological sense of the French word, since it is hand-assembled. This double meaning enables a number of stakeholders to lay claim to “manufacture” movements, without specifying whether they are in fact made by another manufacturing firm that has several clients. The secretive culture of the watchmaking valleys remains as strong as ever, even though it is rendered largely irrelevant by internet and the social networks. It is thus impossible to get official confirmation of the name of the brand to which the German retailer Wempe entrusted the production of the CW3 caliber housed in its Chronometerwerke Power Reserve watch, even though one can in fact discern the signature of the Swiss “motorist” (watch industry jargon term for a movement maker), MHVJ. Likewise, Bremont long concealed the fact that its BWC/01-10 caliber had been ordered from La Joux-Perret. Conversely, Meistersinger and Christopher Ward make no attempt to hide the origins of their five-day power-reserve movement, which comes from a newcomer among “motorists”, Synergies Horlogères. Reflecting a more classic approach, Bvlgari and Tudor have both begun producing base calibers in an entirely independent manner. The first has been making its BVL191 in La Chaux-de-Fonds for three years now, and the second has recently introduced its very first in-house movement, the MT5621. It is impressive to note the speed at which Tudor has achieved the maturity required to master a self-winding movement equipped with a silicon balance-spring and also chronometer-certified.

Tudor has begun making its own chronometer-certified MT5621 caliber.

The Bremont Jaguar MKI and its Caliber BWC/01-10, featuring a rotor designed like a vintage steering wheel and sourced from La Joux-Perret.

Nomos is launching its new slim and economical self-winding DUW3001 base caliber.

Never mind the means employed, what counts is the final result, and the race for new calibers is well and truly on. As well as giving the brands independence, it also enables them to achieve that all-important goal of differentiation. The appearance of exclusivity is the ultimate goal, since an own-name movement is an invaluable way of standing out from the crowd. What counts most is personalization, a rotor bearing the brand emblem, an aesthetic detail that changes everything. Sometimes such details are far more than minor. Instead of the customary 48-hour power reserve, Oris has opted for a ten-day autonomy. Its Caliber 110 has just morphed into the 111 version, featuring a date window as well as its non-linear power reserve. This is a fine return to roots for this brand that used to be a major manufacturer. This capacity is also embedded in the genes of the German brand Nomos, which is launching a new thin and highly economical self-winding movement. These innovations are very diverse in terms of their prestige, their origin and their sophistication, but all of them enrich the watchmaking scene. They break the mechanical monotony threatening the entry and mid-range market segments, the lungs of the Swiss watch industry.