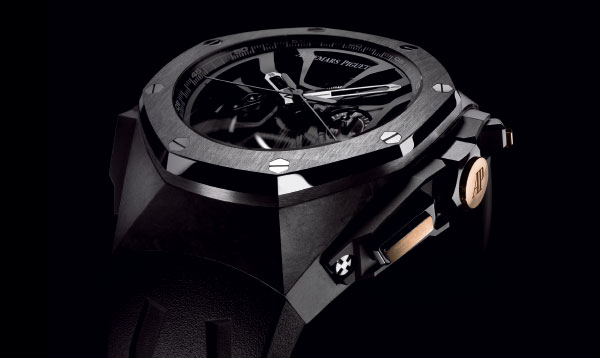 Audemars Piguet is known for its advanced horological concepts and desire to constantly push the limits of engineering excellence. They have been creating concept pieces since 2002 but have been experimenting with mechanical watch technology from the firm’s inception as a Manufacture in 1875. In 2010, F1 legend and Audemars Piguet ambassador Michael Schumacher posed an apparently simple question to the Manufacture’s engineers : could they create a mechanical watch that measures and records an extended series of lap times ? It was a challenge that had never before been met, one that was inspired by the driver’s specific requirement. Now, after five years of development, Audemars Piguet has conquered that challenge and is honored to pay tribute to the greatest F1 driver of all time by unveiling the Royal Oak Concept Laptimer Michael Schumacher. It is the first motorsport-specific watch to feature a complication imagined by the celebrated driver, and it is the first time that a movement has been developed at the behest of an ambassador.

A traditionnal split-second chronograph measures intermediate times. Both its seconds’ hands run simultaneously. When the split-second pusher is pressed, one hand stops allowing the reading of intermediate time, while the other keeps going. The Royal Oak Concept Laptimer Michael Schumacher works in a different way. It features a single chronograph driving two central hands via three pushers.The crucial third one at nine o’clock stops one of the two chronograph hands, while returning the other to zero and restarting it. While the time of the most recent lap stands still, timing of the next lap is already under way. As seen on previous Audemars Piguet Concept watches, the Royal Oak Concept Laptimer Michael Schumacher features a 44 mm case made from forged carbon. The bezel, case edges and case back are made from titanium. Close examination reveals subtle references to the man who inspired it : seven stars in honor of Schumi’s seven F1 World Championship titles and his ‘MS’ monogram. The Royal Oak Concept Laptimer Michael Schumacher is available in a limited edition of 221 pieces.

The Royal Oak Offshore is home to some of Audemars Piguet’s most advanced complications. The Royal Oak Offshore Self-winding Tourbillon Chronograph is fitted with the all-new caliber 2897. Its automatic winding system is driven by a peripheral oscillating weight made from platinum. Visible from the dial side and mounted on ball bearings, its design shifts the mass of the rotor to the edge of the movement, thus improving winding speed and efficiency. Its position gives the watch a slimmer profile. Exceptional accuracy is ensured by the hand-finished and -assembled tourbillon. The new Royal Oak Offshore’s sleek black looks offer a more contemporary feel and feature an expert blend of modern materials. The powerful case is constructed from forged carbon, a material that was first brought to watchmaking by Audemars Piguet back in 2007.

The Millenary Quadriennium boasts a unique oval shape and traditional enamel dial that reveal the intricate hand-finished inner workings of the caliber 2905/B01. Its new quadrennial calendar requires adjusting just once every leap year. The oval three-dimensional movement is specifically built to match the case shape. The exclusive AP escapement brings higher efficiency and better timekeeping especially when combined with a double hairspring that compensates position flaws. Therefore, the Quadrennium’s chronometry is improved to match that of a tourbillon by other and unique means.

In 2015, Audemars Piguet unveils the most sonically accomplished minute repeater of modern times : the Royal Oak Concept RD#1, a concept watch developed according to the principles of stringed instrument-making. It is the result of over a century of innovation and a dedicated eight-year sound-research initiative which included a musician/instrument maker, a scholar from the Geneva conservatory and a sound engineer. The result is not simply an academic exercise but a minute repeater watch that awakens sound. It achieves an unprecedented volume of sound transmission in a water-resistant case, which usually muffles it. Specific sound targets have been developed  in order to manufacture the “perfect” sound at an unparalleled volume level. Yet, at the heart of any minute repeater sound is the watchmaker. He is the conductor, the producer, the human element whose skill and passion brings life to a mechanical timepiece. No matter the shape or complication, Audemars Piguet manages to push the limits of watchmaking to new levels of sophistication and accuracy, while doing so in style. 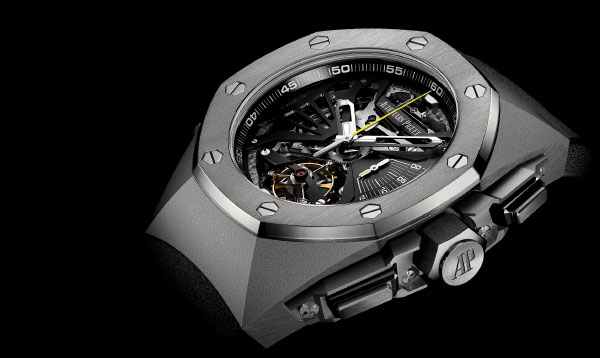