Hegel in the Manufacture 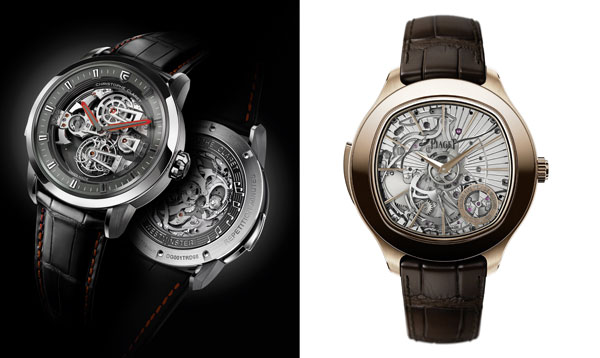 An architectural monument calling upon the skills of civil engineering, a bridge is a term frequently used in the watchmaking world. In addition to the famous tourbillon bridge, it plays a starring role in two new timepieces. The DB28  Skybridge presented by De Bethune features a spherical moon phase extending into an arrow-shaped bridge that seems to point towards infinity. Beneath this astonishing structure, a concave-shaped polished and blued titanium sky inspired by 18th century clocks is studded with white gold and diamond stars. The hour-markers, like tiny suspended spheres, set the finishing touch to this heavenly décor guided by a mechanical hand-wound movement.

At Corum, the Golden Bridge Tourbillon Panoramique named in reference to the Golden Gate Bridge displays a tourbillon with no upper bridge that appears to be levitating above the finely openworked baguette-type movement. Lightness and balance are the key features of this timepiece available in three limited versions : ten in red gold, five in baguette-set red gold, and five in red gold set with round diamonds.

At Greubel Forsey, watchmaking sets the stage for an even more delicate art than that of sculpture: namely microsculpture, a speciality of British artist Willard Wigan. The author of several small pinhead-sized sculptures around the world has managed to fit one of his works inside the Art Piece 1 which also features a Double Tourbillon 30°. It takes a 23x enlarged view to enable observers to admire Wigan’s work through the magnifying lens on the timepiece.

Jaeger-LeCoultre gives rise to a pure masterpiece by clothing the famous Atmos Marqueterie clock, the fifth in this amazing series, with a marquetry work inspired by The Waiting, Gustav Klimt’s famous frieze adorning Stocklet House, a mansion built by a Brussels banker. Produced in a 10-piece limited series, this exceptional model combines the in-house expertise in artistic crafts with the horological feat represented for the past 80 years by the Atmos that draws its energy from temperature variations.

Meanwhile, Vacheron Constantin continues to explore the wealth of artistic crafts with a new opus in the Métiers d’Art collection, named Florilège. Stemming from a collaborative effort between the in-house artisans and the famous enamelling artist Anita Porchet, this new trilogy portrays magnificent reinterpretations of plates from The Temple of Flora, a  respected botanical reference work. Each dial in this limited-edition series features an exceptional play on perspective and depth, enhanced by a diamond-set bezel.

Soprano is a name that speaks volumes about this watch’s connections with the field of music. Dreamed up by Christophe Claret, Soprano associates a 60-second tourbillon and a minute repeater. It is particularly appreciated for the musical quality of its Westminster chime, highlighted by the stepped bridges inspired by the Charles X style.

Virtuosity takes on a very different face for Piaget: that of an ultra-thin automatic model, the Emperador Coussin Minute Repeater watch. This entirely in-house made timepiece sets a twin record for slenderness in its category, with a calibre measuring just 4.8 mm thick and a 9.4 mm case.

Half-dancer, half-butterfly : the new Van Cleef & Arpels fairy flutters its wings to show the hours and minutes. The Lady Arpels Ballerine Enchantée belongs to the Poetic ComplicationsTM collection. Inspired by a quote from Anna Pavlova, this new piece echoes the imaginary world of the prestigious House : “I’ve been dreaming that I was a ballerina, and that I was spending my whole life dancing as lightly as a butterfly …” Sculpted in relief and set with diamonds exquisitely accentuating her waist and face, the golden ballerina is set into motion by a movement driving a double retrograde display revealing the time on request.

Renowned for its poetic complications, of which the latest features the above-mentioned delightful ballerina with butterfly wings, Van Cleef & Arpels offers models conjuring up a lyrical world into which fascinated observers immerse themselves with great delight. Dancers and fairies, swallows and butterflies are the benevolent muses keeping watch over the endless cycle of hours and minutes. Offering variations on the theme of engraving, gold sculptures, miniature painting on enamel, the new Charms Extraordinaires models are indeed lucky charms imbued with an exceptional sense of poetry.

Poetry also makes its presence felt with Chaumet, which introduces a superb little jewellery creation of this kind in the shape of a watch featuring the brand’s emblematic insects: the bee and the spider, engaged in an astonishing game of seduction. On the precious shimmering mother-of-pearl dial set with diamonds, the spider marking off the hours tireless pursues its prey, a diamond-studded bee that points to the minutes. This poetic vision of nature is driven by a mechanical self-winding movement that enables the two insects mounted on off-centred rails to tell an entrancing tale of time.