Records for Rolex and Patek Philippe 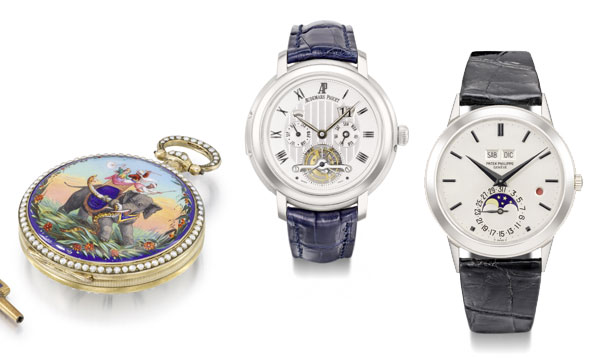 Give or take five lots, Christie’s watchmaking department could have attributed a watch to each day of the calendar. For once, the top lots are not exclusively Patek Philippe despite the fact that their importance in this spring auction will carry a lot of weight in the total value received. It is well and truly Rolex that is in the lead on this occasion, punctuated by legendary names such as Paul Newman or James Bond. A considerable section has been devoted to modern items, and finally, this sale also stands out due to the small number of pocket watches presented.

Radiating from the lakeside Hôtel des Bergues, the Rolex magic should extend from one end of the planet to the other. The high point of a good hundred or so of these celebrated pieces, the reference 4113 split-second chronograph were produced in a run of only 12, thus earning it an estimate of between CHF 700,000 and CHF 1.2 million. In May 2011, another model with the same reference, then valued between CHF 600,000 and CHF 1 million, went under the hammer in the upper bracket. More accessible from a price perspective but more distinctive from an aesthetic point of view, one of the three known Zerographs in the world is also part of this exceptional sale. Halfway between a Bubbleback and an Oyster chronograph, this rare item preserved in its original setting is estimated at between CHF 250,000 and 350,000. Just slightly less (150,000 to 250,000), a completely original 1958 stainless steel Rolex Submariner James Bond stands out with its tropical dial (brown) and excellent condition. Also worth mentioning are two extremely rare Paul Newman models : a 6264 reference whose script is white throughout and not gilded ; and a yellow gold 6241 ordered by  Hermès. To this day this Paul Newman remains the only Hermès engraved Rolex and was sold by Hermès in November 1970.

Contemporary pieces from all around

In terms of quantity, the modern watch section provides a very broad choice. Two private collections are worth looking out for and our favourite is unquestionably that from an anonymous donor who will give the entire proceeds from the sale of his or her ten modern Patek Philippe watches to the Children Action charity. The half a million franc estimate is likely to be exceeded, as the diverse collection contains several weighty references. The second phase of the Grassi Collection is also on offer, consisting of 34 watches worthy of the finest showcases from a wide range of brands. A great rarity at auctions is a Jules Audemars Tradition d’Excellence Cabinet n°2 (featuring a tourbillon and a minute repeater) that has provided Audemars Piguet with the highest valuation in the modern watch section : between CHF 180,000 and 250,000. To quote the slogan of the brand from Le Brassus, to break the rules, you must first master them.

Patek Philippe remains at the top

Around the world in 80 Pateks ? The selection at this Christie’s Geneva sale notably includes two flagship lots and the second episode of the trilogy “A Gentleman’s Pursuit of Excellence” in which Part I brought together seven pieces in November 2012, topping one million Swiss francs. This time, we are talking about eight pieces that are once again of irreproachable quality, including a reference 2499/10, a 3450 and a 1579R. Fans are likely to love it. With an elevated valuation of half a million Swiss francs, the platinum Jumbo Nautilus entrusted to Christie’s is the only 3700-1 reference known today (in platinum). Keeping the best for last, we come to the lot with the highest valuation on this Monday, May 13th.  Estimated at between CHF 800,000 and 1.4 million, this watch tells a fine tale and is in pristine condition (“new old stock” in auction jargon), with the seller being the owner who acquired it in 1981. Never polished nor revealed to the public, this reference 3448 in white gold indicates the leap years on the dial (probably the first Patek Philippe ever produced with a leap-year display), whereas the model in this range that presents this function is usually reference 3450, as of 1982. However, the extract from the archives confirms that this is definitely a 3448 that in some way served as a transition between these two generations.