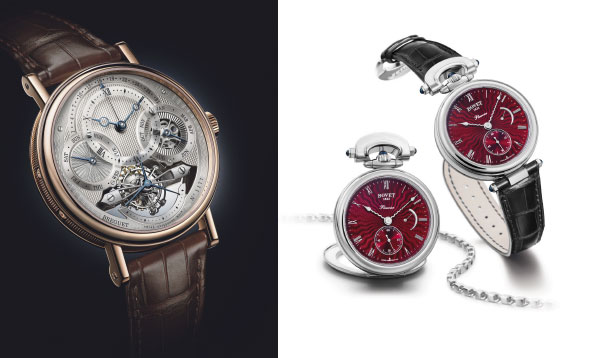 The same holds true for dials as for the rest of a watch : its cost can vary by a factor of one to a thousand. This component lies at the art of the horological aesthetic : it is the visible face of the watch and occupies most of its surface. Constantly in view, it can appear in numerous guises according to the techniques that endow it with various colors, textures, depth and brilliance. Their common denominator is that they all imply almost exclusively manual workmanship.

Many dials are lacquered, yet this popular technique can imply an impressive level of excellence : the dial of the Bulgari Octo Maserati calls for no less than 28 layers of lacquer, with appropriate drying times between each. Making one takes five full days, interspersed with phases of cleaning, brushing, machining as well as polishing in order to achieve a perfect surface state. Moreover, dials leave no room for mistakes, since even the slightest scuff, scratch or knock can send them straight to the scrap. The particular lacquer named Urushi in Japanese is a natural varnish that is one of the noblest. It is used by Chopard for its L.U.C XP Urushi limited series, which are crafted by a Japanese master lacquer artist with 20 years’ experience. He imprisons gold dust between two successive layers, creating a rich effect stemming from countless hours of meticulous work.

When it comes to creating a sense of visual depth, it is hard to imagine any more effective technique than Grand Feu enameling. Jaeger-LeCoultre uses it to dramatic effect in its Master Ultra Thin Grand Feu, while adding a rare ingredient. Several layers of enamel are fired at a temperature of 900°C. With each operation, the dial may crinkle and the enamel may crack or splinter, in which case it will have to be discarded. The dial of this model is further enhanced by white gold hour-markers that are coated before reappearing thanks to meticulous polishing. The flinqué enamel technique employed by Bovet for its Amadeo Fleurier 43 mm consists in enameling a metal surface with a geometrical guilloché motif, thereby enhancing the dial with distinctive colors. Alongside the double benefits of these twin techniques, they also imply double the difficulties and a whole lot more time.

No brand takes the art of guilloché (also referred to as engine-turning or hand-engraving on a rose engine) quite as far as Breguet, which has indeed made it an essential pillar of its identity. The company workshops are equipped with a fleet of historical machines which engrave the gold dials with evocatively named guilloché motifs such as grain d’orge (barleycorn), Clou de Paris (hobnailing), vagues (waves) soleillées (sunburst), petit panier and grand panier (large and small crossweave), etc. These machines have been hunted down with great difficulty and are entirely hand-operated. The distinctive Breguet aesthetic consists in associating different motifs, such as the five appearing on the Classique Tourbillon Quantième Perpétuel – which does not even exhaust the list of those the brand is capable of crafting. Once again, the slightest mistake will mean scrapping the dial, since there is no hope of correcting such flaws.

There can be no mistakes when it comes to fine stones, either. Jaquet Droz has made them a specialty that is showcased in its Petite Heure Minute adorned with ruby heart. With any stone, it is a question of finding rough blocks and then cutting, drilling and polishing them. However, they all have natural flaws and the dial-maker’s art consists in examining the stone in order to find the zone that can be used as a dial. The rate of breakage and rejection during the machining process is stupendous, which means that the cost of the material does not stem from its rarity, but instead from its fragile nature. It is in fact the ability to transcend matter that endows dials with their beauty and determines their cost. The Arceau Millefiori by Hermès is an eloquent example : its dial is produced by the Cristalleries de Saint-Louis using the same technique employed for the famous Venetian paperweights. These crystal balls are filled with a base consisting of colorful glass tubes assembled into vivid motifs. These tubes must be created, assembled, cut out, shaped, melted and then shaped into a section forming the dial. This lengthy and intense manual process can only be performed by master glassmakers with years of experience.

Experience is also a must for the embroiderers at Lesage in crafting the dial of the Chanel Mademoiselle Privé with Embroidered Camellia Decoration. A silk canvas serves as the backdrop for a precious silk thread embroidery depicting Coco Chanel’s favorite flower. In this perfect blend of haute couture and horology, the difficulty is not confined to the execution alone. A close study of the materials is indispensable, since the dial will be exposed to light for many decades, which means the ageing of the silk must be factored in right from the start. The multiple constraints involved in making such a dial, along with its permanent visibility, naturally imply hand craftsmanship. Its production calls for well-qualified and expert skills that can prove hard to find. The decisive cost factors lie in this rarity as well as in the extremely high discard rate of the inevitable flawed versions, often due to the fragility of the material itself.