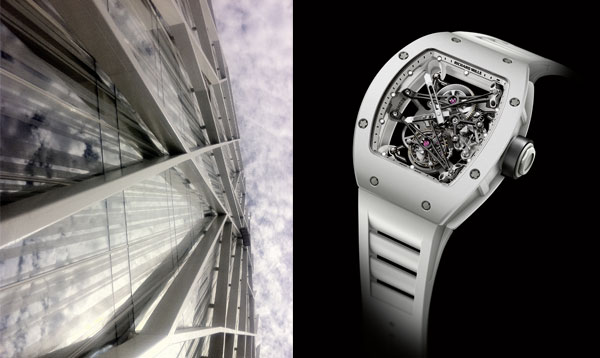 Lightweight, impact resistant, comfortable and designed to adapt to the extreme conditions and forceful movements associated with golf, the RM 038 Tourbillon Bubba Watson combines all the advantages of a great sports watch, for everyday wear. Its skeletonised calibre, a hand-wound tourbillon movement, features a baseplate and bridges made from grade 5 titanium whose resilience was tested and optimised during extensive validation trials. The case is made from Magnesium-Aluminium AZ91, a rugged, lightweight alloy reflecting Richard Mille’s penchant for technical materials… and his appreciation for the performance of elite athletes : after F1 with Felipe Massa and tennis with Rafael Nadal, the watchmaker is entering the world of golf, a demanding sport that is synonymous with uncompromising accuracy.

Located at one end of Avenida Diagonal, the new headquarters of the company Telefonica is a 110-metre tower with 24 floors supported by a unique structural system, part of which is located on the outer facade. The lattice structure rises the entire height of the building. Deciding against vertical columns, Enric Massip-Bosch used an exoskeleton structure as a load-bearing system, resulting in completely free and open floor plans.

The modular facade is composed of white aluminium tubes and extra-clear screen-printed glass. This design allows sunlight inside the tower and makes it look transparent.

In the tower’s urban setting, Massip-Bosch aims to convey different information and perceptions depending on whether the viewer is far away or nearby. First, the size of the tower and its presence in the urban context of Barcelona make it a striking landmark on the Avenida Diagonal. In addition, the special construction details and interior spaces of the tower create a close relationship with visitors and transform it into a monument.

Like the tower, the watch displays its inner structure, its workings and the load-bearing system, all visible at a glance. The internal structure of the object is enhanced and at the same time, it becomes an element of representation. The shape of the structure is exaggerated and, like an allegory, it seems to be an organic assemblage. Turning away from the traditional image of a timepiece, the viewer equates this watch’s expressive shape with its undeniable visual appeal.

The first time is unforgettable and always moving. For a watchmaker like Patek Philippe, whose long history is marked by innovation, it is surprising that a first time can still occur. The legendary first time… The new Annual Calendar Regulator presents several innovations and novel features never before seen in the collections of Patek Philippe. It is the brand’s first wristwatch with a regulator dial, characterised by a large central minute hand, a subsidiary hour dial at 12 o’clock and a seconds subdial at 6 o’clock. The calibre of this ultra-sleek timepiece is also an innovation, since it is the first ultra-thin self-winding Patek Philippe movement with a mini-rotor that displays the subsidiary seconds at 6 o’clock. It is also the very first totally new basic movement designed to accommodate components made from Silinvar®, an innovative silicon derivative.

Its architectural counterpart : The Bregenz Museum designed by Peter Zumthor

Located on the Austrian side of Lake Constance, rising between impressive buildings, the Bregenz museum is a singular object, somewhat reminiscent of a large glass cube. From the outside, by day or night, the building looks opaque, like a monolithic object, or calls to mind the light emitted by an oversized lamp.

The facade of the building was designed to capture the natural light of day : the changing luminosity of the sky is absorbed by the opal glass envelope and then, through a system designed by the architect, distributed to the different levels in the gallery. And although the envelope of the building is devoid of windows, the interior is filled with natural light. Characterised by highly uniform light intensity, the materials chosen for the facades give the building a sense of timelessness and hint at the activities going on inside the museum.

Like the Patek Philippe watch, the museum is characterised by a seemingly austere, spare design that draws attention to the individual elements of construction. The minimalist expression seen in both the watch and the museum is conditioned by the presence of small details that ultimately transform the first impression of austerity. A longer look at these elaborate arrangements reveals the elements that make up their construction and embody their true values. In the words of architect Mies Van de Rohe, “God is in the details.”