In praise of the extraordinary 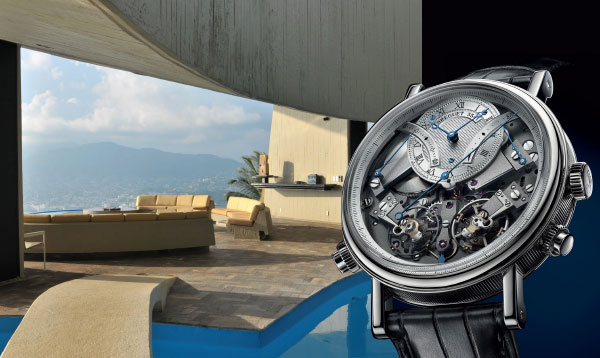 The watch : Tradition Chronographe Indépendant 7077 de Breguet Offering a perfect blend of mechanical power and aesthetic refinement, Breguet sets its stamp on a chronograph brimming with innovative features. The strong point of this model dedicated to the measurement of short times is its exceptionally precise caliber whose construction is based on two independent gear trains. The first is dedicated to driving hours and minutes display, while the second gear train with its balance wheel oscillating at a frequency of 5Hz drives the chronograph and draws its energy with each new zero-resetting operation from a new type of spring. This complete dissociation between the two gear trains offers a major advantage in the quest for reliability pursued by Breguet, since it avoids the activation of the chronograph having any adverse effect on the smooth running of the main gear trains. The mechanical feat is matched by a highly technical aesthetic. Surrounded by a 44mm white gold case with a fluted caseband, the movement’s balance wheel is positioned directly opposite that of the chronograph in a delightfully symmetrical effect.  Framed by two retrograde hands indicating the chronograph minutes and power reserve, the offset subdial at 12 o’clock carries the hours and minutes hands. The large chronograph seconds hand is placed in the center, contributing to the extreme readability orchestrated by Breguet through a show of extraordinary technical power.

This extraordinary construction stands on a steep hill above the bay of Acapulco. It was built as a holiday home for Jeronimo Arango by John Lautner in 1973. John Lautner was a student of Frank Lloyd whose work made an undeniable impression on Lautner’s architectural vocabulary. One reaches the house along a road which runs along a large retainer wall which takes us in a winding manner to the entrance, where we stop before a large overhang made of rough concrete. The entrance is marked by a majestic bronze door, sculpted by German artist Mathias Goeritz. The interior spaces are amazing and the visitor finds himself surrounded by unique volumes which play on light and the view of the sea, the impression of being suspended between heaven and earth, created by a simultaneous play on levels and the different perspectives which frame the magnificent panorama. A canal surrounding the living space doubles up as a swimming pool, giving the impression that the residence literally merges with the sea.

The concrete elements dovetail into each other with a precision and a spatial vernacular that are in a league of their own. The round and oval shapes which are exceptional for this era give this building an almost mechanical albeit fluid character. The different levels through which one moves highlight the special design of this work. Like Breguet’s Tradition Chronographe Indépendant 7077, the volumetric perception is fascinating and develops a unique language capable of capturing the attention of the observer. In both cases, technological mastery and expertise serve a common purpose : a quest for exceptional harmony and unique aesthetics.