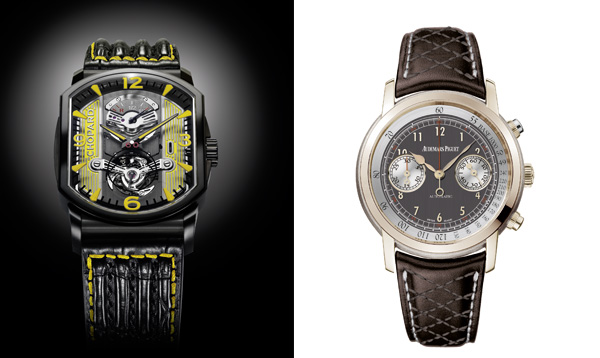 The L.U.C Engine One Tourbillon DLC titanium from Chopard sports a black and yellow look and is driven by the famous L.U.C 1TRM calibre. This titanium tourbillon watch is distinguished by its powerful lines evoking the world of motor racing.

The JULES AUDEMARS Gstaad Classic chronograph created for Only Watch is the only one to feature a rose gold case, Audemars Piguet having issued the Gstaad Classic limited edition in titanium.

Most of the big-hearted brands participating in the Only Watch operation have been faithful to the highly creative biannual charity operation since 2005, while others have joined this year, and all are placing their DNA at the disposal of this noble cause. Their unique pieces, some of them developed in great secrecy for over a year, will be showcased this autumn in the prestigious and spectacular setting of the Monaco Yacht Show. Only Watch is returning to its first love by entrusting Antiquorum with orchestrating the auction to be held on September 22nd, as well as the international exhibition preceding it this summer. As a loyal companion ever since the launch of this adventure, GMT is delighted to be presenting its readers with a preview of the majority of the horological creations (because they are not always watches in the strictest sense of the term) that the most renowned collectors on which the world’s most eminent collectors are preparing to set their sights. As Luc Pettavino, founder of Only Watch and the Monaco Association against Muscular Dystrophy points out in his preface, the stakes are extremely high. The proceeds from Only Watch will determine the means made available to researchers and thus the future of the children concerned.

Thanks to a patented musical mechanism, the Réveil Musical in white gold from Breguet plays the tune “A Castle in the Sky” either on request, or at a predetermined time. After each complete dial rotation, the child’s hand engraved on the dial touches that of an adult portrayed on the flange.

The unique nature of the Bovet Tourbillon 7 Days Inverted Hand-fitting stems from its exceptional hand-crafted decoration. Its red gold Amadeo case serving to transform this timepiece into a reversible wristwatch, a table clock or a pocket-watch is adorned with a majestic dragon and phoenix motif inspired by Chinese mythology.

Developed by BLU Bernard Lederer Universe on the occasion of the 50th anniversary of Yuri Gagarin’s historical space flight, the eponymous orbital tourbillon sweeps around the dial not in 60 minutes but in exactly 108 minutes – the time spent in space by the Russian lieutenant.

Only Watch is an opportunity for DeWitt to develop and introduce its Concept Watch N°3, named the X-Watch. This reversible model is topped by a broad X-shaped “bonnet” or “hood” partially covering the dial. The latter may be opened by means of four pushers positioned on either side of the case.

The unique Océanographique 4000 watch presented by Hublot owes its name to a partnership undertaken with the eponymous museum in Monaco. The first model in a family of watches capable of diving to depths of 4,000 metres, it is distinguished from subsequent models by its colours – since its hands and hour-markers are red and white in reference to the Principality.

The Golden Bridge Automatic by Corum appears in a fascinating anthracite-coloured Titalyt® thermal-treated titanium case. Its automatic linear winding baguette movement is visible through the sapphire crystal case-back engraved in red with the Corum logo and the inscription Only Watch 2011 Pièce Unique.

Girard-Perregaux is unveiling a unique piece made from a titanium and ceramic alloy. Equipped with a self-winding movement, it features date and world time displays as well a day/night indicator and a flyback chronograph.

A red gold dial and grand feu enamelled dial are the key design characteristics of the Vintage Pulsographe watch by Montblanc, driven by a hand-wound movement with chronograph and small seconds. The reasonably sized 39.5 mm-diameter case frames a dial surrounded by a pulsometric scale indicating the number of heartbeats per minute thanks to the central chronograph seconds hand.

In tribute to the marine chronometers that forged the success of Glashütte, the Senator Chronometer appears clothed in rose gold framing an elegant matt black dial with indications driven by Calibre 58-01 which ensures precise synchronisation of the minutes and seconds hands.

Ikepod has called on the talents of Marc Newson to create this large hourglass in red borosilcate glass. Measuring 150mm x 125mm, this distinctively designed object is filled with steel nanoballs that take 10 minutes to flow into the lower part.

Frédérique Constant is distinguishing itself with a leather boxed Family SET specially created for Only Watch and comprising four unique watches – a Maxime Manufacture and a Lady Heart Beat Amour, both self-winding models in rose gold; and a Chrono Junior and a Lady Junior in steel – all featuring an commemorative engraving on the back.

A faithful participant in the Monaco-based operation, De Bethune is dedicating its famous night sky in polished and blued titanium to a DB25 8-01-1297 white gold watch featuring a dial depicting the sky above Monaco on January 8th 1297 when the rock was officially conquered by François Grimaldi. The stars of the Orion and Gemini constellations are picked out in gold and diamonds, while the mirror-polished movement equipped with a silicon/platinum balance may be admired through the back of the model.

Under the leadership of Benoit Vuitton, Louis Vuitton presents a Tambour Diving watch in blackened white gold fitted with a transparent case-back revealing the column-wheel movement and featuring a strap and various dial accents in orange, the favourite colour of Paul Pettavino.

Piaget remains in tune with its latest innovations in the field of ultra-thin watchmaking with a special edition of the  Altiplano, which for the first time features a black PVD treated version of the skeletonised 838P movement – creating a striking contrast with the rose gold of the screws and the hour, minute and small seconds hands.

The famous Mikrograph by TAG Heuer, which is quite simply the only mechanical chronograph capable of displaying 1/100ths of a second, beats for Only Watch at the heart of the legendary square Monaco case that is as iconic as ever more than 40 years after the film Le Mans.

The Manufacture Patek Philippe offers a new interpretation of reference 3939 with its Only Watch unique piece in steel framing a black enamel dial. The appeal of this timepiece stems as much from the pure sound of the minute repeater as from the beauty of its tourbillon.

Crafted in cooperation with Chinese artist Huang Hankang, the HM4 Only Watch by MB&F is topped by a miniature flying panda cast in solid 18-carat white gold using the lost wax casting technique.

Developed with and for Rafael Nadal, the RM 027 by Richard Mille to be auctioned at Only Watch is the exact same one worn by the champion during his winning watch at the 2011 Monte Carlo tennis tournament. This hand-wound tourbillon weighing a mere 20g including the wristband is also the prototype that served for the final test phases.

An evolved version of the Freak, the Freak Diavolo Only Watch by Ulysse Nardin is named after its diabolical-looking power-reserve indicator with its “horns” set against a black backdrop. The patented balance-spring and a large part of its escapement are made form silicon. These two innovative features are combined with a flying tourbillon indicating the seconds, along with two state-of-the-art ball-bearing mechanisms.

Romain Jerome mingles its DNA with that of the Principality by unveiling the Rock the Rock DNA watch, featuring a unique dial incorporating a tiny proportion of rock extracted from the famous rock of Monaco. The result is a time-honoured face framed by an ultra-contemporary matt black ceramic bezel.

Manufacture Zenith is offering two exclusive pieces with left-hand winding designed specifically for left-handers. Stemming from the rose gold Captain Chronograph line, the first features a gold case, intended for week-day professional wear; while the second is a steel Pilot Chronograph with a more casual and sporty look suited to leisure activities.

Van Cleef & Arpels presents a refined interpretation of a Poetic Complication inspired by Jules Verne. Evocatively named De La Terre à la Lune (from Earth to the Moon), this watch is distinguished by its dial depicting an imaginary sky dotted with stars and planets made from a marquetry-work of fine stones and champlevé enamels.

Urwerk gives life to a mythical bird with the UR-103 Phoneix in white gold, hand-decorated by the master engraver and automaton maker Jean-Vincent Huguenin, an artist fascinated by the world’s many cultures and legends. Designed as a “talisman and a source of energy for its future owner”, according to Martin Frei, this watch features a satellite hour indication.