The fine art of Haute Horlogerie 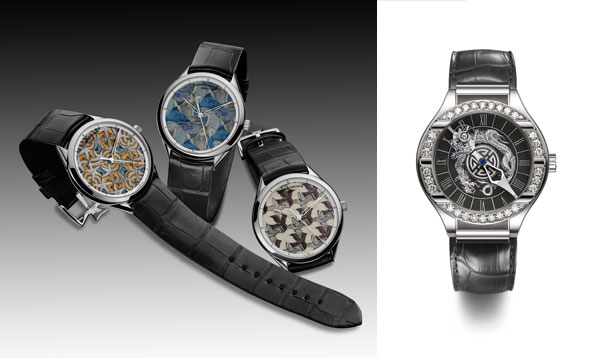 In mechanical watchmaking, movement are traditionally enhanced by refined finishing and decorations that are hand-crafted on the most prestigious models. They are in particular demanded by the regulations of the Poinçon de Genève quality hallmark which has just been revised on the occasion of it 125th anniversary. Chamfering, polishing, straight-graining, smoothing down, straightening, burnishing, circular graining, Côtes de Genève and similar decorations are required on even the tiniest parts or hidden faces, the overriding purpose being to eliminate any traces of  machining. The label, which remains optional and reserved for manufacturers in the Canton of Geneva, is therefore not intended to represent Swiss horological excellence as a whole. Roger Dubuis is currently the only brand to submit its entire production to this rigorous scrutiny and it celebrated the hallmark’s new demands by introducing an Excalibur Tourbillon flying single-pusher chronograph model in an 8-piece limited edition.

Skeletonised movements are doubtless the most powerfully representative of the purely traditional art of horology. Originally, these were classically made movements on which most of the parts were openworked and engraved. The genre is now being considerably renewed through fantastic structural research. The totally or partially visible movements are the object of increasingly diversified stage-settings and play a key role in the overall design of the watch. The range now available comprises revisited constructions like the Three Gold Bridges by Girard-Perregaux or the Golden Bridge by Corum, as well as resolutely contemporary creations such as the Richard Mille watch line which have become benchmarks in this field. The 3D trend is spreading to original display modes and spherical representations of the tourbillon, the moon or the earth.

In terms of watch exteriors, the decorations are naturally combined with shapes to lend character to watches and some of them have become inseparably associated with certain brands or collections. This is true of the fluted motif at Breguet, the imperial columns at DeWitt, guillochage on the Patek Philippe Calatrava, the gadroons on the Piaget Polo, the “tapisserie” pattern of the Audemars Piguet Royal Oak. Nonetheless, the decorative arts applied to cases or dials are more often used to distinguish specific models. Generally speaking, they are based on time-honoured techniques such as gemsetting, engraving, guillochage, marquetry-work and enamelling – cloisonné, champlevé and miniature painting – that are now enjoying strong renewed interest. They are thus combined in many different ways including  on men’s models that are the chosen focus of this article. The industry is also welcoming techniques never previously used on watches.

Among the specialists in this domain, one might mention Patek Philippe, which has always defended the artistic crafts and which annually a substantial collection of one-of-a-kind creations and limited series; Cartier through its Collection Cartier d’Art ; Vacheron Constantin and its remarkably innovative Métiers d’Art collection; Jaeger-LeCoultre with a wide range of models produced in series or on demand on the Reverso; and Bovet which has made a speciality of engraving and enamelling in tribute to its origins. The decorations created by ArtyA and Romain Jerome are even more disruptive. 2012 is witnessing the emergence of several creations celebrating the Chinese year of the dragon, as well as the first ever appearance on watches of straw marquetry. Hermès has used this technique to reproduce certain emblematic tie motifs such as chevrons or small squares on its Arceau automatic watches.