With its Geneva auctions on May 12th and 13th, Phillips is asserting its ability to scale horological summits, as well as smoothly negotiating lower altitudes.

Within just three years, Phillips in Association with Bac & Russo has won a place at the very peak of the watch auction business. By dint of putting together exceptional lots and selling them at equally outstanding prices, this tandem has become a specialist at setting records – and more besides, as will be confirmed in Geneva on May 12th and 13th. During these two days, two catalogs will be presented in the auction room. The first is named Daytona Ultimatum and will encompass 30 or so Rolex Daytona models featuring various degrees of rarity. The second is called Watch Auction Seven and will assert the all-round capabilities of the Phillips watch department.

Daytona Ultimatum is a natural extension of the apparently boundless worldwide enthusiasm for the Rolex chronograph. “And yet these are not in fact rare watches,” says Head of Sales Alexandre Ghotbi, “thereby proving that auction values stem from public demand. The market is no longer dominated by dealers, but rather by individuals”. This eagerly anticipated sale looks set to confirm the chronograph’s star status, as since the historic record reached in 2017 by the model having belonged to Paul Newman himself (17.7 million US dollars), the legend has reached unprecedented heights. However, as Alexandre Ghotbi confirms, “there will be Daytonas of all kinds”.

Held in parallel, the Geneva Watch Auction Seven will be divided into several sections featuring some especially noteworthy lots, including an exceptional A. Lange & Söhne model. The steel 1815 ‘Homage to Walter Lange’ is a one-of-a-kind creation from which profits will be donated by the Saxony-based brand to the Swiss charity Children Action. Steel Lange models are creating quite a stir at auctions at the moment, and this model houses a movement that the late Mr Lange specifically wished to develop.

This second catalog also gives pride of place to “the independents”. These gifted artisans of time certainly deserved a dedicated section. The standout models include a Chronomètre Souverain from F.P. Journe, taken from a boxed set of five one-of-a-kind watches with a 38mm steel case. In another sub-section of the Geneva Watch Auction Seven, Phillips is announcing a series of extremely special Breguet watches. “These are 20th century models that have never previously been put up for auction, 100% unseen to date”, enthuses Alexandre Ghotbi. The brand has achieved some impressive results for models reflecting the heritage of its illustrious founder. What kind of reception can one expect for this historically little-known chapter in its production history ? There will doubtless be some fine surprises in store overall, especially since the catalog encompasses a range of affordable pocket and wristwatches from the major brands. Alexandre Ghotbi reassuringly confides that “buyers will be able to treat themselves to models across the entire price spectrum.” 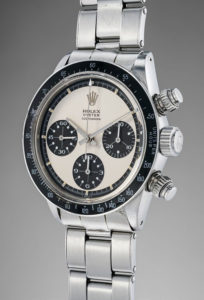 The star of every auction, and especially of the DAYTONA ULTIMATUM line : a “Paul Newman” ref. 6263 model with a white Panda dial. 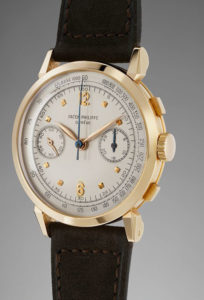 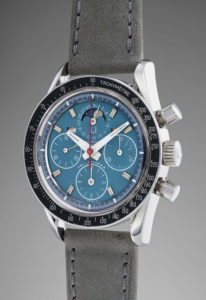 For a horological treat without breaking the bank : a UNIVERSAL GENÈVE triple calendar model with a blue ‘Aqua’ dial. 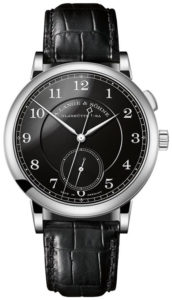