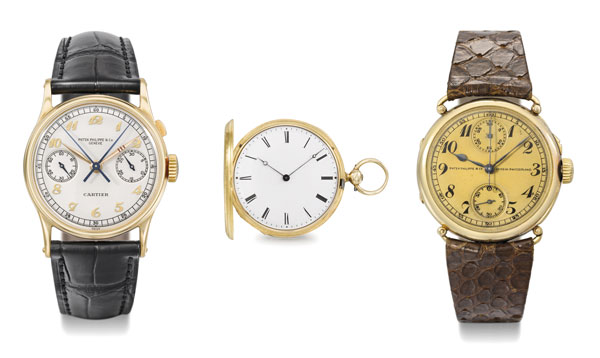 Christened Patek Philippe 175, the sale on November 9th at the Hôtel des Bergues in Geneva should not however overshadow the one taking place the following day, again under Christie’s hammer, which groups 400 lots of which 40 per cent from Rolex, to an estimated total value of between CHF 11 and 18 million. Nevertheless, this amount corresponds exactly with the range envisaged for the 100 Patek Philippe models. According to Thomas Perazzi, senior specialist from Christie’s watchmaking department, each piece has been the subject of a lengthy discussion with their respective sellers in order to establish a reasonable – even conservative – price. There will be no shortage of surprises, but Christie’s expects to sell all the lots, which are exceptionally diverse. Their estimates range from CHF 1000 to 1.6 million !

The incredible variety of models is apparent at two levels – chronological and typological – given the fact that Christie’s desire in putting together this sale was to provide a faithful reflection of Patek Philippe’s entire production. Quality and rarity are the keywords. The oldest lot dates back to 1847 and the most recent to the 1990s. The pieces come from all over the planet, and 58% of them have never yet been auctioned, and are thus “fresh to the market” in collectors’ jargon. Original owners or their descendants have agreed to entrust these family heirlooms to Christies, which explains the other high proportion worthy of note characterizing this sale : 22 per cent of lots are offered with their original certificate and box. While the majority of timepieces take the form of wristwatches, 40 per cent of them are pocket watches (including the very first key-wound models) and four are clocks. Although our selection of photos gives some idea of the incredible wealth encompassed in this line-up, it is important to remember that this historic hundred includes tourbillons, minute repeaters, perpetual calendars, perpetual calendar chronographs, along with enameled, quartz, jewelry, modern, one-of-a-kind and designer pieces such as that of Gilbert Albert.

This time, the experienced collector and great Patek enthusiast currently at the head of the LVMH group’s watchmaking division, Jean-Claude Biver, who had notably acquired the Patek Philippe model up for grabs at the Only Watch charity auction in 2009, is making his contribution to Christie’s by entrusting it with his Reference 1563. And speaking of great names in Swiss watchmaking, René Beyer (from Chronométrie Beyer in Zurich) is parting with a 1907 pocket watch (lot 56). Estimated at between CHF 300 000 and 500 000, lot 46 is a 1944 Reference 1518 in yellow gold that once belonged to King Farouk of Egypt.

W.E. Boeing : while this name daily crisscrosses the skies around the planet, it is not necessarily associated with the world of watchmaking. It can nonetheless be found engraved on the back of the incredible Reference 130 sold by Cartier with Breguet numerals, the only monopusher flyback chronograph known to exist in this configuration. Fresh to the market, lot 35 did indeed belong to William E. Boeing, a pioneer of modern aviation whose direct descendants agreed to entrust Christie’s with this unique piece estimated to be worth between CHF 400 000 and 800 000.

Meanwhile, the anonymous origin of the two flagship lots will not prevent them from earning fame to the sound of the auctioneer’s hammer, since their combined worth represents nearly a quarter of the total of the sale. Estimated at between CHF 1.6 and 2.6 million, the 1951 Reference 2499 first series in pink gold is the only pink gold perpetual calendar hallmarked in England. This is the second example of four models known to have been produced under this reference. Just below it (at between CHF 1.5 and 2.5 million), Reference 2523 is a 1953 Worldtimer in yellow gold with two crowns and an incredibly beautiful blue enamel central dial, which constitutes lot 64. Each lot is accompanied by a commemorative Patek Philippe 175 presentation box and a silver coin engraved with the number of the lot and name of the auction. Worldtempus.com will be providing further analysis of this sale.