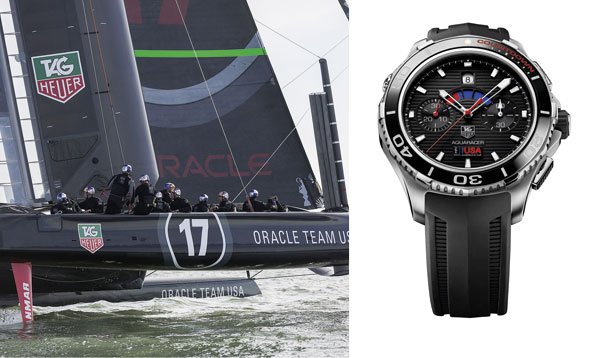 Active for decades in the America’s Cup through associations with various challengers according to various strategic opportunities, such as the China Team in the 32nd edition, TAG Heuer has become a ubiquitous player in the 34th America’s Cup to take place in San Francisco this summer. The sports chronograph specialist is supporting both the American Defender, Oracle, and the Swiss team qualified for the Youth America’s Cup, Team Tilt. A de facto participant in the America’s Cup as the Defender, Oracle ensures excellent visibility for TAG Heuer, not only in the final encounter to be raced on  the AC72 rigid-wing carbon catamarans designed for the Cup), but also for the past two years in the America’s Cup World Series circuit aboard the extremely spectacular AC45 boats. Moreover, legendary skipper Russell Coutts’ announcement last year of the birth of a Youth America’s Cup for 19 to 24 year-olds led to the selection of a Lake Léman team. TAG Heuer has demonstrated keen discernment in backing these up-and-coming championships, since the youngsters racing for the Société Nautique de Genève came first in the qualifying regattas and will be taking part in the very first Youth America’s Cup at the end of August in San Francisco. Between now and then, they will also be sailing a D35 in the Vulcain Trophy on Lake Léman, as well as an M2 and an Extreme 40 in the Mediterranean. As the icing on the cake, they are among the favourites tipped for wins on both the Léman and in San Francisco. TAG Heuer can look forward to painting more winners’ podiums in its red and green brand colours.
<
>