Triple fusion : GMT and WorldTempus in the same boat 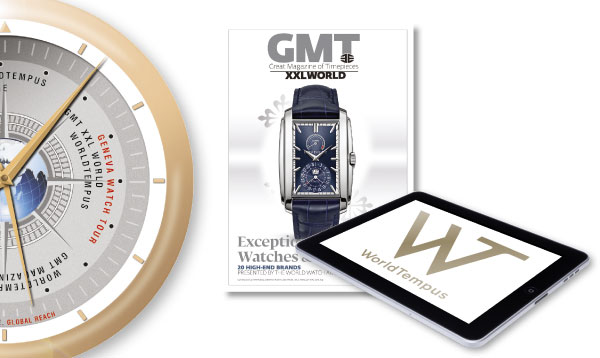 Partners with GMT for years, the greatest digital name in luxury watchmaking, WorldTempus, has joined forces with GMT Publishing, which amongst other things incorporates the titles belonging to Skippers Publishing*. This extension of the current joint venture (GMT Publishing) between the Lamunière family and the writer of this article constitutes a solid, serious and healthy company. In addition to maintaining the distinct identities of these brands that are all leaders in their sectors of activity, this triple fusion accentuates the development of each entity with the aim of adapting to suit reader expectations and the need of the watchmaking sector. Quality remains the trio’s unwavering watchword.

Through its XXL World version, GMT, the Swiss watchmaking magazine with the highest publication frequency and the only publication with audited REMP certification, makes a significant contribution to increasing the international renown of WorldTempus. Created in 2002, initially in French with the support of 80 founder brands and partners, WorldTempus has offered English content since 2009, which today attracts two thirds of visitors. A complete overhaul of the site has been under way for the past two years and the result of the considerable investments made can be seen in the spectacular increase in traffic.

Thanks to the efforts of the management and its shareholders, in 2014 one of the oldest Swiss watchmaking sites broke the symbolic barrier of a million pages viewed monthly by people from 215 countries. In January 2014, WorldTempus registered new record highs with 70% growth in one time visitors and 84% in pages viewed compared to January 2013. While Switzerland remains on the third step of the podium just ahead of the United Kingdom, the USA tops the rankings. India has also undergone very strong growth, and is in fifth place, while Singapore has made it into the top ten by claiming the ninth position.

To update it on a daily basis, some 15 international journalists, well-known specialists in watchmaking, provide wide diversity with exclusive articles in addition to videos and watch presentations. Ten new pieces of content are thus published every day. WorldTempus also references 11,000 watch models. An experienced English native speaker (and bilingual) chief editor, Paul O’Neil, has just been hired to manage the editorial team and to continue the development of the site.

This rapidly expanding offer of rich, unique content is complemented within GMT Publishing by more recent exclusive platforms such as Geneva Art Tour and Geneva Watch Tour. GMT and WorldTempus also remain the historic media partners of the Geneva Watchmaking Grand Prix. Together, they continue to work to promote the 12th Art, the art of measuring time.

* Created by the co-founder of GMT, Skippers Publishing publishes Skippers, Voile & Océan (the official magazine of the Swiss Sailing Federation, quarterly since 2001) as well as the official magazines of the Société Nautique de Genève and the Grand Hotel Park Gstaad.