From earth to cosmos 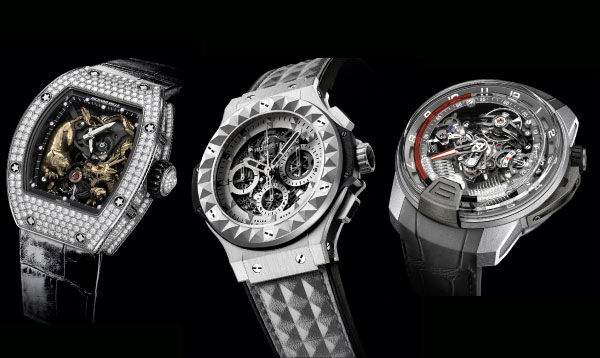 HYT watches are modern-day clepsydras or “water clocks” featuring an unprecedented architecture (the 1st Art) combining mechanical movement and fluid display. The hours are indicated via a circular tube that apparently fills up and empties instantly at the end of each cycle. The system in fact comprises two reservoirs activated by bellows. More sophisticated than the H1, the H2 model boasts a new construction including V-mounted bellows as well as additional functions, a crown-position indicator and a temperature indicator. The latest H2 SQ titanium and platinum version is also the first to be skeleton-worked with beadblasted black PVD-coated or satin-brushed titanium-toned surfaces. It is issued in a 15-piece limited series.

At Richard Mille, 2014 is women’s year and the watchmaker has renewed its association with Michelle Yeoh to create the RM51-01 Tiger and Dragon watch. This jewellery evokes the upcoming release of the Tiger and Dragon 2 film in which the actress reprises her role as Yu Shu Lien. These animals conveying strong symbolism in Asia are depicted as sculptures (the 2nd Art) that are remarkably integrated into the watch movement. They appear not only on the front but also on the back. They are crafted in 3N red gold using special burins or gravers specifically made for creating tiny details and meticulously coated with a micro-lacquer treatment. Both the tiger and the dragon thus appear astonishingly lifelike.

The queen of flowers for Piaget, the rose has inspired Sylvie Deschamps, one of the finest French embroideresses, appointed a Maître d’Art in 2010. To create her work on the dial of an Altiplano, she used authentic “needle painting” (the 3rd Art), a technique invented in ancient Imperial China and which enjoyed great success in 18th century Italy and France. The work is all the more remarkable in that it is crafted in miniature. The artist had to adapt to the size of the watch and her stitches measure an average of two millimetres, three at the most: more than just painting, this is “needle painting embroidery”. Thousands of extremely closely spaced straight stitches form an apparently three-dimensional flower without the needle ever crossing through the thread. Viewed from a certain distance, it is impossible to distinguish the stitches from each other and the pictorial effect is truly sensational. The smoothly graded shading effect is achieved by using silk threads of six different colours, ranging from off-white to dark pink. The finishing is done without knots so that the back is perfectly flat and adheres perfectly to the dial. It takes nine meters of thread and over a week’s work to create one rose.

Hublot is pursuing its collaboration with the famous Depeche Mode music (the 4th Art) group to support the activities of the charity : water association whose mission is to ensure a clean and safe water supply in developing countries. On January 30th 2014, the partners unveiled the new products to be sold on behalf of the association : a one-of-a-kind tourbillon that will be auctioned in Moscow on the eve of the concert the group will be giving in March ; a 250-piece limited-edition watch; as well as 10 boxed sets comprising a guitar and a watch. The “Depeche Mode 2014” watch is a steel Big Bang with grey calfskin strap with thermomolded nail motifs. Each of the sets is engraved with the name of a city on the group’s Delta Machine world tour following the release of the album bearing the same name.

Audemars Piguet sweeps us off into the cosmos with a truly extraordinary High Jewelry model. 449 brilliant- or baguette-cut diamonds perform a skilfully choreographed dance (the 5th Art) over the entire watch. The dial forms a sky sprinkled with shooting stars that pursue their trajectory beyond the confines of the case. Lucky charms on either side swing gently in step with wrist movements. The bracelet is composed of two strands following parallel paths before crossing and then parting ways again over the sapphire crystal. They form a constellation evoking the shape of the Big Dipper. Daringly combining symmetrical and asymmetrical effects, mingling Art Nouveau and Art Deco movements, this jewelry creation is also a purely horological model that houses a Manufacture-made hand-wound movement within a very generously sized case for this category.

The moon-phase indication generally lends hints at poetry (the 6th Art), as is beautifully illustrated by the Twenty-8 Eight Full Moon by DeWitt. The horological complication developed and produced within the Manufacture is gracefully displayed by two white mother-of-pearl half-spheres moving beneath a pink gold-coloured aperture evoking the shape of a refracting telescope. The star-studded backdrop is made from Goldfluss, a synthetic glass produced with copper and involving a special firing technique. Discovered in 17th century Venice, it is the inspiration behind the famous Murano glass. It appears on the right-hand side of the dial where it creates a striking contrast with the visible part of the movement representing the earth.