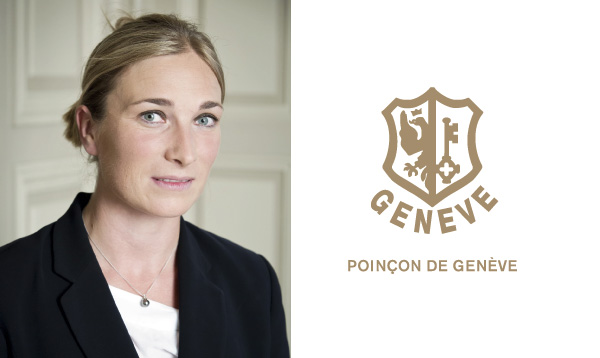 Cartier, Chopard, Roger Dubuis and Vacheron Constantin stamp their watches with the Poinçon de Genève, the standard of excellence certifying the workmanship of movements and decoration according to very strict criteria laid down and tested by Timelab. As the previous marking of components sometimes turned out to be unsuited to the extreme delicacy of certain parts, Timelab is now using patented technology developed by a spin-off of Geneva University, Phasis, which alters metal surfaces at a microscopic level enabling the marking of tiny mechanical parts. Anne-Sophie Guerra emphasizes that nano-structured hallmarking, which involves no contact, no displacement of matter and no left-over burrs after engraving, also enables a perfect definition of the hallmark’s outlines and a more aesthetically pleasing result – whether on hard or precious metals. In addition, it constitutes a new means of fighting counterfeiting.

Prior to taking on the interim management of Timelab in the spring of 2014, Anne-Sophie Guerra was project manager for the sensory metrology project defining the visual control processes for the Poinçon de Genève. Her mission involved characterizing slight defects (such as small marks) in a component, based on regulations, and defining a method to evaluate whether they should be stamped or not. Her skill and experience in the realm were noticed by Timelab while she was working at Patek Philippe,  where she designed a methodology for developing these visual criteria within the framework of her doctorate between 2005 and 2008. Once her thesis was put into practice by the world’s most famous Manufacture, which has since developed its own hallmark (Patek Philippe Seal), she took part in training 600 employees of the brand on the application of these criteria up to 2011, and was subsequently appointed head of quality assurance.

Going forward, Anne-Sophie Guerra intends to continue guiding the Poinçon de Genève on the road to innovation, as well as the rise of the Timelab watchmaking laboratory (which also receives requests from brands to conduct compliance tests and product homologation procedures), and the Observatoire Chronométrique de Genève inaugurated in April. The latter notably certifies the chronometric performance of timepieces, as well as data relating to water resistance,, power reserve and magnetism.