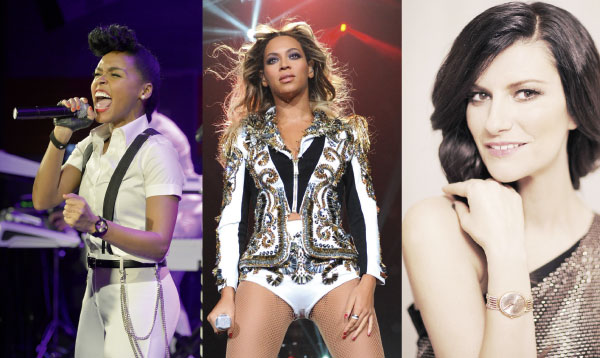 Beyoncé proudly wore the “Quatre” ring by Boucheron for her New York concert on December 22nd 2013. For the American star, there was nothing haphazard about the choice of this ring. A closer look at her personal life reveals that she was born on September 4th and also that – whether a sign of destiny or a delightful coincidence – her husband Jay-Z was born on December 4th. They got married in April, and we’ll let you guess on which day of the month… The number 4 clearly holds great meaning for Beyoncé and appears to be bringing her plenty of good luck – as one can readily believe from the sales figures for her latest album titled 4 and of which three million copies have already been sold worldwide.

To celebrate the 4th anniversary of its partnership with the Recording Academy, Gucci publicly unveiled the new limited series of its Interlocking collection : the Gucci Grammy. A nod to the prestigious organization, the dial of this watch is made from Grammium, a material used in making the symbolic gramophone-shaped figurine presented to winners at the Grammy Awards. The Recording Academy is known for its many talented artists, but also and above all for its conservative high-quality character that it is keen to cultivate. The association between the two parties thus owes nothing to chance, since both promote the same values and this determination is clearly apparent in the work done by each.

For her “Viveme” video clip, Italian singer Laura Pausini sings and dances with the Gilda d’Eberhard & Co on her wrist. This is the second international single from “20 – The Greatest Hits”, a collection of her greatest successes over the first 20 years of her international career.