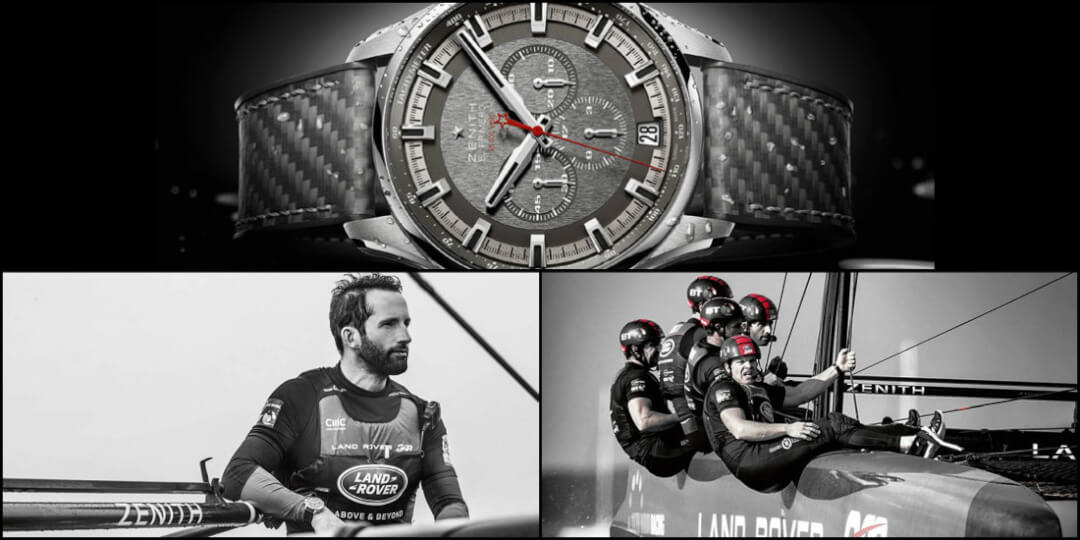 CHARTING A COURSE TO THE AMERICA’S CUP

Within the framework of its partnership with Land Rover, title sponsor of the UK Challenger for the 35th America’s Cup, Zenith is official timekeeper of the Land Rover BAR team, which is one of the favorites to contend in Bermuda with the Defender, Oracle Team USA, in June 2017. The world’s oldest sports trophy remains one of the world’s most avidly followed sailing competitions and has become particularly spectacular since it is raced on catamarans with rigid-wing sails, flying across the water at phenomenal speed that make helmets a must for crew members. Five-time Olympic medalist and helmsman of the winning boat in the 34th America’s Cup in San Francisco, the team skipper Ben Ainslie, who received a knighthood from Queen Elizabeth II of England, has also been a Zenith ambassador since their partnership was announced last year in Japan during the Louis Vuitton America’s Cup World Series.

Sir Ben Ainslie and his team members are thus wearing the first models of the self-winding El Primero Sport Land Rover BAR Team chronograph, a 250-piece limited series. As one would expect, their logo appears proudly on the sapphire crystal back of the steel case, floating above the oscillating weight bearing the Côtes de Genève motif. The high-tech nature of their multihull boat is reflected in the exterior – notably featuring a velvetfinish slate gray dial and a carbon fiber-coated rubber strap – of this sturdy chronograph powered by the famous El Primero column-wheel chronograph movement that has long since proven its worth.

What are the chances of Land Rover BAR in the 35th America’s Cup ?

It’s the only major sporting event that Britain has never won, our goal is very much to right that wrong and bring the Cup home. It’s not going to be easy, since we’re a new team and up against strong competition but, we wouldn’t be doing it if we didn’t think we could win. We have recently launched our America’s Cup Class race boat, ‘R1’, so for now it’s about getting out training on the race course as much as we can.

Zenith is a brand with a huge amount of heritage, tradition and history, which very much mirrors the America’s Cup. Zenith’s reputation for quality and precision made them the perfect fit as official timing partner to our team, Land Rover BAR.

How have you been involved in the making of the limited edition ?

Timing is everything in life. For sportsmen in a competitive environment, it’s critical. Zenith is a pivotal partnership for us as a team, it helps us to maintain our standards and we have been working with them to really capture the essence of this challenge.