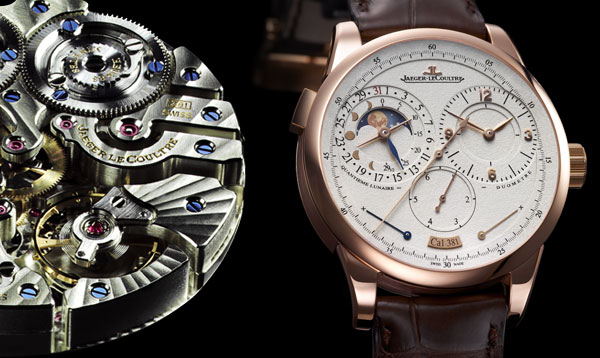 A technical feat as well as an undeniable technical success, the Duomètre à Quantième Lunaire is presented in 2012 with a revamped case and a slightly smaller diameter than the one released in 2010 (42mm at the time). This new interpretation of the famous Duomètre is equipped with the cult Dual-Wing movement, distinguished by its ability to drive horological complications with chronometer-worthy precision thanks to its two independent sources of energy. Having earned widespread technical and commercial approval, as confirmed by the sales of the watches for which it is intended, this concept also appears in the new star model launched by Jaeger-LeCoultre at the SIHH 2012. Until its appearance, each complication appearing on the dial tended to come between the motor organ and the regulating organ, representing a daunting number of additional wheels to be driven, and of spring forces to be overcome. The resultant energy consumption generally disturbs the oscillations of the balance, and thus the timing or rate of the watch. To solve this problem, Jaeger-LeCoultre has thus developed a movement equipped with two independent mainsprings: one exclusively dedicated to supplying the regulating organ, and the other to provide the energy required to run the full set of indications – in this case hours, minutes, seconds and the moon phase. This ingenious device uses an insignificant amount of energy com‑pared with the indications that are provided, and this energy is above all constant – meaning it has “zero” influence on the regulating organ.
The synchronisation between these two separate mechanisms (hence the name Dual-Wing) is governed by a jumping seconds hand (visible at 6 o’clock) which makes one full rotation in one second, composed of six successive jumps and providing a fascinating show. Two openings on either side harmoniously display the power-reserve indicators revealing the state of the two energy sources. In an ultimate touch of refinement, the twin-type movement structure makes it possible to spread the other indications very clearly over the dial surface. Hours and minutes are shown on the right of the dial, while a symmetrically placed pointer-type date indication on the left side is displayed concentrically with a moon-phase indicator featuring a double hand showing the age of the moon by number of days on the one hand, as well as the state of its phase for the Southern hemisphere on the other. The picture would not be complete without a mention of the device that resets the two seconds hand during time-setting without stopping the oscillations of the balance; as well as the stunning quality of the movement finishing and decorations visible through the sapphire crystal case-back.
<
>