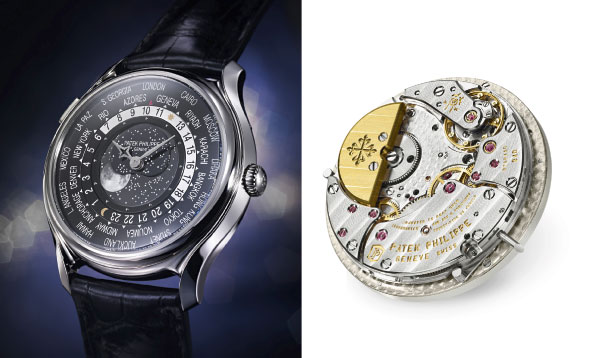 Among the festival of new releases commemorating Patek Philippe’s 175th anniversary, the men’s and ladies’ limited-edition World Time Moon stands out in several ways. The most clearly visible takes its place at the dial center with an ultra-realistic large-format moon-phase display composed of two superposed mineral glass disks. The upper half of the second stationary disk features a heart-shaped contour accurately reproducing the visible portion of the moon night after night. The lower disk depicts a star-studded sky and the moon performs a complete revolution over the lunar cycle of 29.53 days, even faithfully reproducing several craters and ‘seas’. This central display is surrounded by elegantly whirling world time indications, with Geneva replacing Paris on this pair of models housing the specially developed Caliber 240 HU LU. The new ultra-thin self-winding movement drives the Ref. 5575 men’s version as well as the Ref. 7175 ladies version in gem-set pink gold with a slightly smaller diameter. Why not ask for the moon ?