Corum : Corum and the fantastic four 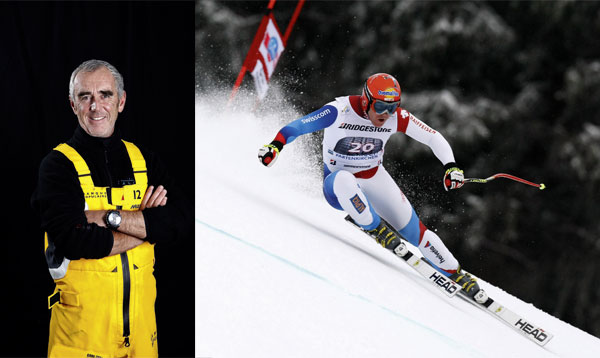 As a traditional partner of sailing events since the famous Admiral’s Cup which gave its name to Corum’s flagship line, the brand with the key symbol has recently shown considerable flair in diversifying its ambassador portfolio – to the extent of reaping immediate return on investment. A year ago, who would have wagered on such an avalanche of successes for Neuchatel-born skier Didier Cuche ? His file had indeed been through the hands of several companies before Antonio Calce, CEO of Corum and an entrepreneur deeply attached to human relations, decided to entrust him with this role. But at 36 years of age, weren’t his winning days behind him ? Not at all ! Soon after the announcement, Didier Cuche was voted the 2011 Swiss Sportsman of the Year 011, and then outright 2011 Swiss Personality of the Year – before winning his fifth victory in the legendary Kitzbühel downhill ski race. Shortly before the latter achievement, on Corum’s more customary territory, its sailing ambassador Loïck Peyron shattered the non-stop round-the-world crew sailing record and won the much-coveted Trophée Jules Verne. The hyperactive gentleman skipper who is slated to take part in the America’s Cup will also be sailing the seven seas on the catamarans competing in the 2012 Extreme Sailing Series. In the course of the latter, he will regularly cross paths with Ben Ainslie, the four-time Olympic gold medallist looking for a fifth victory at the London Olympic Games. Historically the first Corum ambassador of the Calce era, he is also participating in the America’s Cup World Series. And the fourth member of the fantastic four ? In the original story, it was a woman, and Corum will doubtless succeed in choosing exactly the right one.
<
>