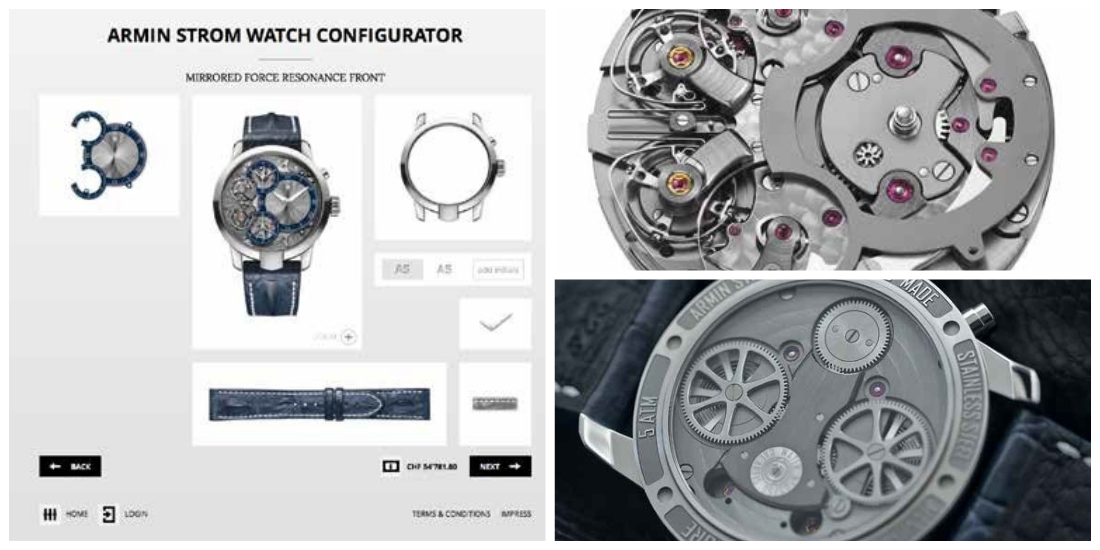 Resonance is a sophisticated and demanding horological technique that is rarely attempted and even less frequently mastered. A single body in motion conveys its vibrations to its surroundings. When another body with a natural frequency similar to that of the first receives its vibrations, it absorbs the energy from the former and begins to vibrate (or resonate) at the same frequency, by a phenomenon referred to as “sympathy”. The first body acts as an exciter and the second as a resonator. Resonance has three advantages. Firstly, it stabilizes time measurement, which is beneficial for precision. Secondly, it saves energy, like a cyclist following a wheel (known as ‘drafting’) of another rider in order to benefit from their slipstream. Thirdly, it reduces the negative effects caused by outside disturbances, such as an impact on the balance-staff. All of which results in more stable rating and enhanced precision. The two balance wheels are thus mounted in opposite directions. An outside shock that slows down one of the balance wheels increases the speed of the other by the same amount. The two balance wheels then tend to attempt to get back in resonance : in recapturing their cadence, they average out and minimize the effects of this outside influence.

In the pursuit of accuracy, precision and rate stability, resonance has generally called for the use of two independent mainsprings, gear trains, escapements and balance wheels, each connected by a rack and pinion to allow fine turning of the distance between them. This precise adjustment of the distance between the two regulators was vital in order to incite resonance, which sees the two balances finding a concurrent rhythm in opposite directions so as to continuously average out errors for maximum accuracy. Armin Strom has introduced a new approach that accelerates, facilitates and enhances the reliability of the resonance achieved by the two regulating organs. They are coupled by a clutch spring, a component clearly visible on the dial side and shaped somewhat like a tuning form. It physically connects the two balance wheels and serves as a conductor of the vibrations enabling the sympathetic coupling.

Working on this unique basis that commanded exceptional public attention, Armin Strom now wishes to add a traditional hand-crafted dimension, enabling customers to opt for exclusive engine-turned dials. Creating a striking contrast with the technical nature of the movement, these dials will be available in various colors (blue, black, anthracite, red or two-tone) as well as adorned with several patterns (sunburst, barley-corn, concentric waves). So as to enable optimal access to these finishing options, Armin Strom has incorporated this ultra-technical watch into its personalization program. The online configurator, which already features six of the brand’s most iconic models, thus further enriches its range by welcoming the Mirrored Force Resonance. Collectors can now configure this watch by choosing between two different material for the case (stainless steel and 18K pink gold), from many strap options (with colors such as gray, brown, black, blue and white), as well as details such as the stitching color. Alongside these possibilities, the style and color of the hands and dial, including new hand-crafted guilloché options, are all part of this personalization process. To ensure the best possible visual effect as a high level of quality, Armin Strom has chosen to associate with master-watchmaker Kari Voutilainen. The dial will thus be produced in his Môtiers workshop on centuries-old engineturning lathes that can only be controlled by the artisan’s hand. The complex motifs, achieved by extremely delicate engraving of a smooth metal disk, are authentic works of art reflecting the talent and the extreme technical skill of these watchmaking artisans. They provide the perfect frame amply deserved by the exceptional technical dimension of the Mirrored Force Resonance.