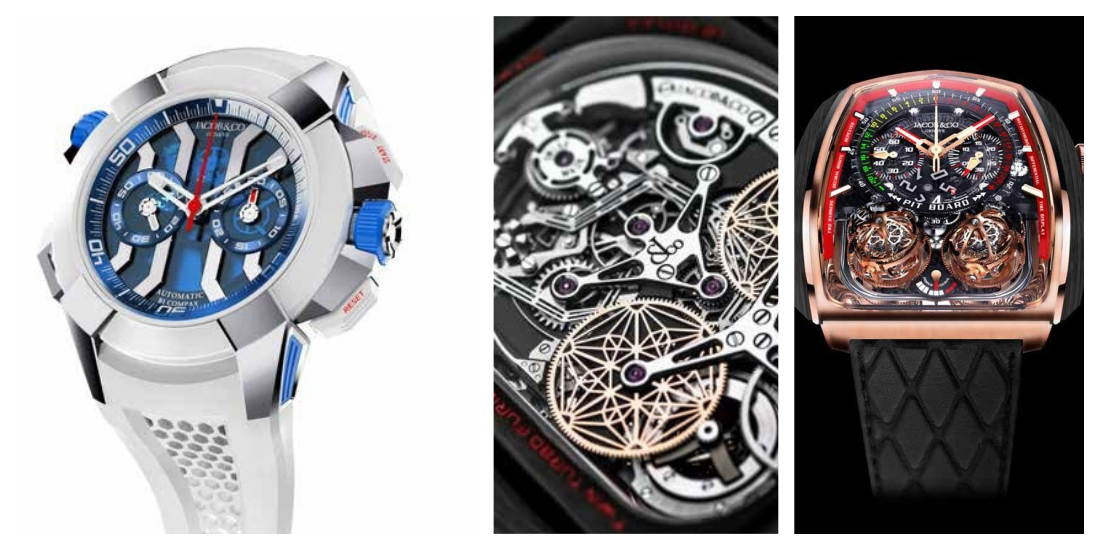 We promised you Hollywood-style horology ? Here is a quite literal example, unequivocally titled : Opera “The Godfather”. This miniature masterpiece unites two ancestral Swiss mechanical traditions : watchmaking and music boxes. As you have doubtless guessed, the musical system plays on demand the first 20 seconds of the main theme of Coppola’s legendary movie by means of a micro-cylinder. The technical prowess does not stop there, however, for when the system is triggered, the entire baseplates performs a 120° rotation, while the differential dial remains perfectly aligned with the time readoff axis. Add the Maison’s signature triple-axis tourbillon and you get a timepiece in which miniaturization and complexity flirt with the boundaries of excess. Nonetheless, the theatrical nature of such a creation may not appeal to devotees of pure mechanical horology and it is doubtless with them in mind that Jacob & Co. has created another technical ‘monster’ : the Twin Turbo Furious. Imagine two tri-axial tourbillons, a minute repeater and a monopusher chronograph, all within a single wristwatch. And if you’re tempted to consider that the ultimate expression of complexity, think again. The minute repeater also chimes ten-minute intervals and is protected from inadvertent handling by several security systems. Meanwhile, the chronograph features an additional function enabling the watch to display the seconds differential compared with a reference time initially determined by the chronograph hands. After such a profusion of mechanical prowess, the Epic X Chrono might almost appear overly simple. Yet this ultra-sporty bi-compax chronograph also houses a rare mechanism that sets it apart from many of its competitors : a countdown function that can be activated by a 10 o’clock crown. Out-of-the-box horology, confined by no limits other than those set by Jacob Arabo himself.