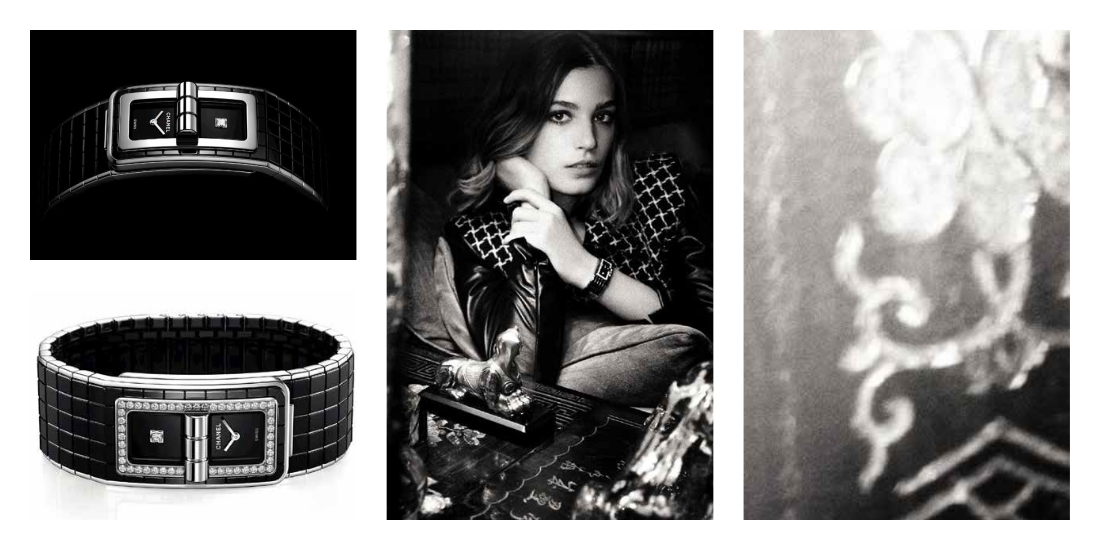 What is a code ?  Dictionaries tell us that it is a set of rules governing social behavior, as well as a conventional, rigorously structured system of words, letters and symbols used to represent others. In case you were wondering, you are indeed reading a watchmaking article. Yet these two definitions do not provide the keys to deciphering what is going on behind the latest exceptional Chanel creation, the aptly named Code Coco. This hybrid model has the boldness and impertinence of the legendary Mademoiselle herself, who enjoyed making light of codes, conventions, as well as the passing of time. Within the straight-laced world of the upper classes, Gabrielle Chanel skillfully succeeded in disrupting social markers and rules, subverting them and combining them to create new and incredibly modern alternatives. Through her creations, she did the same with objects and colors – exactly as the Code Coco is now doing.

Is this watch a bracelet, or is this bracelet a watch ? The brilliant inventor of the French word for the wristwatch, montre-bracelet (literally bracelet-watch), undoubtedly did a great job of reconciling different opinions. Nonetheless, the human mind – which is stubbornly accustomed to fitting things into neatly labelled boxes – can’t help wondering. Especially since other references from outside the watchmaking world confuse things even more… And therein lies the entire charm of this watchmaking gem, a distillation of the Chanel identity. When open, the Code Coco appears like a long and supple steel (or ceramic ribbon), with a grid motif that brand devotees will immediately recognize as the famous quilting (matelassé) of the iconic 2.55 handbag. A handbag, you say ? That’s right, and the pattern itself was derived from a men’s hunting outfit… Which is how in deciphering codes one ends up generating other codes – and also and above all how an utterly simple and understated decoration ends up conveying such a wealth of content. The resemblance is not merely superficial, since the Code Coco also fastens like the 2.55. Wrapping itself around the wrist, the bezel – separating from and placed at the opposite end the watch ‘head’– slots into the latter to serve as a buckle. And the most astonishing aspect of all appears in the dial center, where the handbag clasp appears in lieu of hands. A 90° twist reveals time, topped by a sparkling princess-cut diamond enhancing visual equilibrium. A clasp hiding a watch display definitely implies a change of code, but does this mean this watch can be referred to as a ‘secret’ watch, the term applied to those with a cover concealing the dial ?

Codes, playing with codes, subverting codes… all while conveying a single style : that of Chanel. And to paraphrase Anna Mouglalis, French actress and ambassadress of the Maison : “The very essence of Chanel elegance lies in a nonostentatious, timeless approach. Combining all these codes has resulted in a trademark style”. A quote that sums up the spirit of the Code Coco. It is worn exactly as its owner wishes, according to individual codes, style and identity. Very much like the modern women that the brand has chosen to promote it. And whereas Anna Mouglalis seems to wear it like a watch, Kim Young-Seong, artistic director textiles and ready-to-wear for Chanel’s fashion studio, enjoys having two on the same wrist, like bracelets. A supremely chic option that will also enable her to use them to display an extremely practical GMT function. Another code ? A reference to your favorite watch magazine ? Who knows ? Whatever the case, the Code Coco is a fresh demonstration of the famous haute couture brand’s remarkable creativity in the field of watchmaking. It is undoubtedly destined to become an iconic model and is bound to give rise to countless variations. Currently available with or without a gemset bezel, it is equipped with a high-quality quartz movement and produced in the workshops of the Manufacture Châtelain in La Chaux-de-Fonds. Reactions have been enthusiastic and naturally conjure up dreams of the next creations from Chanel.