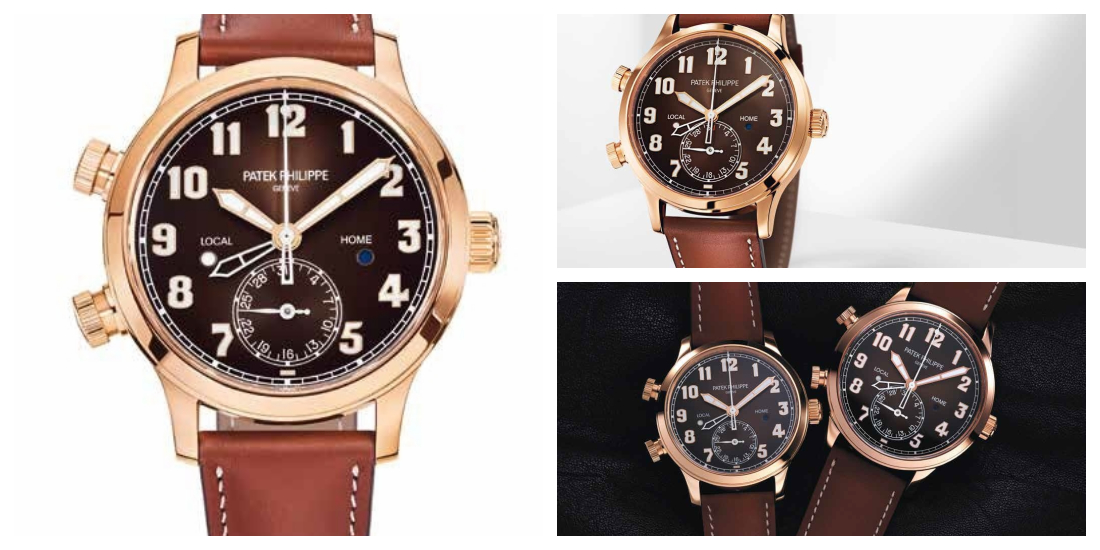 Launched in 2015 in a white gold case teamed with a blue dial, the Calatrava Pilot Travel Time reference 5524 now comes in a new rose gold version framing a brown dial adorned with a black shaded effect. A refined exterior for this original watch paying tribute to the Patek Philippe tradition of aviator watches. This ref. 5524R is a fresh reminder of the contribution to the history of airborne adventures made by the Geneva-based family-owned Manufacture. The Wright brothers’ first flight took place in 1903, and Charles Lindbergh became the first pilot to fly across the Atlantic in 1927. During the years between these two milestones, watchmaking experienced a crucial evolution, moving from waistcoat pockets to wrists. Moreover, just as sailors had done from the 18th century onwards, aviators also used the watch as a navigating instrument. Based on an idea put forward by Philip van Horn Weems and enriched by suggestions from Charles Lindbergh, the “hour angle watch” serving to calculate positions in a simple, fast and accurate manner was created. Patek Philippe developed two of these hour angle wristwatches, also called siderometers and now part of the Patek Philippe Museum.

The Calatrava Pilot Travel time ref. 5524R is a resolutely masculine watch, an accurate and reliable watch with a dual-time display. For almost 80 years, Patek Philippe watches have been solving time-zone issues with peerless simplicity. In cooperation with the brilliant watchmaker Louis Cottier, the Manufacture developed its first “World Time” watches in the 1930s. In 1959, it filed the first patent for the Travel Time mechanism.

This sophisticated device is built into selfwinding Caliber 324 C FUS, featuring central seconds, a pointer-type date and a 21-carat gold rotor. This legendary movement is meticulously decorated and embodies the pinnacle of mechanical horology thanks to the Gyromax balance-wheel, teamed with a Spiromax® balance- spring in Silinvar®, a proprietary material of silicon. The matchless properties of the latter material, as well as the patented geometry of the balance-spring, guarantee the excellent reliability and extreme rating precision required by the Patek Philippe Seal, corresponding to a tolerance of just –3/+2 seconds per day. A transparent sapphire caseback provides a clear view of the eminently refined movement.

The classically understated face of the Pilot Travel Time is matched by a large (42mm-diameter) rose gold Calatrava-style case. The crown and the two time-zone pushers at 8 o’clock (+1 hour) and 10 o’clock (–1 hour) bear a raised fluted pattern ensuring the ergonomics and the technical touch expected of a precision instrument. These pushers also come with a patented security system – which involves first unlocking them with a one-quarter turn, before relocking them by another turn in the opposite direction – serving to prevent any accidental deregulation of local time. The dial legibility reflecting its aeronautical inspiration, is reinforced by applied hollowed rose gold numerals filled with a white luminescent coating, as well as large baton-type hands that are also visible in the dark. The “1” numeral on the pointertype date display stands out in bright orange on a subdial at 6 o’clock.

Self-winding Caliber 324 S C FUS is distinguished by its highly user-friendly dual-time display system. All the user needs to do is press one of the pushers on the left side of the case to move the local time either clockwise (with the lower pusher) or counterclockwise (via the upper pusher) in one-hour increments. Meanwhile, the cut-out hand keeps track of home time. The two time zones are equipped with day/night indicators (apertures at 9 and 3 o’clock). When the user is not traveling, the two hours hands remain perfectly superimposed and form a single entity. The new Calatrava Pilot Travel Time reference 5524R is fitted with a vintage brown calfskin strap. It is secured by a rose gold clevis prong buckle reminiscent of the harnesses that allowed pilots to keep their survival kits readily deployable at any time.

The feminine version of the Calatrava Pilot Travel Time, reference 7234R-001, combines a 37.5mm rose gold case with a brown dial in the same subtle black gradation towards the periphery. This watch with dual-time display and date indication linked to local time is also the first self-winding Travel Time watch in the ladies’ collection from the Manufacture. With a model closely resembling its masculine counterpart, Patek Philippe is continuing to enrich its range of complicated feminine watches.