Cyrus : The Only Watch Kambys is a fantastic example … 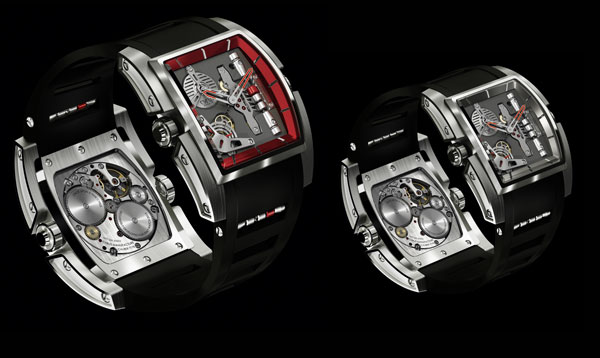 According to legend, Cyrus the Great was abandoned by his grandfather in a forest and adopted by a wolf, from which he inherited his mental and physical strength. Launched in the 1st year of the 2nd decade of the 3rd millennium, the niche brand that always does things its own way once again surprises watch collectors with the Kambys collection, featuring a secret animation. The name of the collection is inspired by the name of  “Cambyses” which was the name of Cyrus The Great’s son and successor.

The design of the Kambys was developed in perfect synergy with the brand’s identity, which places great emphasis on attention to detail. Available in titanium and black /red gold DLC titanium, it is recognizable as a Cyrus from first glance : it has a sleek design, where each element has been carefully weighed up and designed by their own team. A patented design, which perfectly moulds the shape of the wrist. This collection is the fruit of the partnership between the two founders, Julien and Laurent Lecamp. The distinctive mark of the two cousins can be found discreetly inscribed on the back of the caliber. Four digits, 7778 are etched, recalling the cousins’ two birth dates. The selection of functions, the design features and the unusual bracelet were all created and developed within the family, with the utmost respect for the Cyrus philosophy. The 100% in-house Manufacture movement with a seven-day power reserve was created under the aegis of renowned, award-winning Swiss watchmaker Jean-François Mojon. Highlighting the classic character of this new timepiece, Cyrus offers elegant functions (hours, minutes, seconds, power reserve) and a unique, secret animation, all brought to life by a spectacular movement which is fully visible through the transparent sapphire crystal case. The three barrels sliding progressively along a vertical axis (patented function) as the seven days unfold makes the power reserve indication (between 2 and 4 o’clock) extremely captivating. The two smaller cylinders represent two days of power reserve each, the third one three days. The seconds function is truly original and technically advanced, with its three angled hands, each of which counts 20 seconds before passing the baton to the next hand. Finally there is the secret animation (between 9 and 12 o’clock), which is activated by simply pressing the crown at 3 o’clock. The text ‘limited edition’ then appears. After pressing it again, the Cyrus coin (the first coin in the history of humanity, produced under the reign of Cyrus the great) appears to replace the previous inscription. One last press makes the Cyrus logo visible, unless the owner prefers to personalize this animation according to his wishes.

The very first timepiece of that new collection in limited edition will be the one dedicated to Only Watch 2013 . The secret animation of the Only Watch Kambys  is a fantastic example of personalization : the text ‘pièce unique’ appears when pressing the crown, then ‘the flagship of Monaco’. The third barrel and the upper dial of this unique piece are red, reminding the colour of the Principality of Monaco. The ONLY WATCH KAMBYS is the very first timepiece of the new KAMBYS collection, which makes this ONLY WATCH timepiece even more unique and exclusive.

With the Klepcys collection, Cyrus’s know-how is expressed through an original triple complication conceived in collaboration with the movement design engineer Jean-François Mojon. Firstly, the retrograde hour hand which moves across a 180° axis and changes colour (by a 90° rotation) in order to indicate day or night. Whatever the position of the hour hand, the minute and seconds discs are always lined up with it and indicate time in linear read-off mode. This alignment, based on a patented mechanism that regulates the speed of the gear trains for the hours (which are retrograde and pivoting) as well as the minutes and seconds. The numerals indicating the units of the date (from 0 to 9) are static and follow on from each other and only the tens move past the units. Each time a ten numeral reaches the figure 9, the ten becomes retrograde and pivots 90 degrees to leave room for the following ten which takes its place in front of the 0 units number. And finally, a spherical moon-phase display with representation of craters of the moon serves to connect this timepiece with the sky. The moon phases are shown by the progressive rising of a black cover that gradually enshrouds the spherical moon.

The Klepcys Mars in titanium features two worldwide patented functions: a three-dimensional retrograde indication mechanism displays hours, minutes and seconds on a movable axis with a day/night indication, while maintaining precise control over the height of the retrograde hour hand with a ruby bearing ; while the calendar with large date is indicated by three-dimensional retrograde and pivoting tens (also featuring precise control of the height of the tens hand with a ruby bearing). The Red Planet has been removed from the solar system and now appears in a hand-painted version rotating  inside Cyrus watches at the same speed as it does in the universe, i.e. every 24 hours, 37 minutes and 22 seconds.