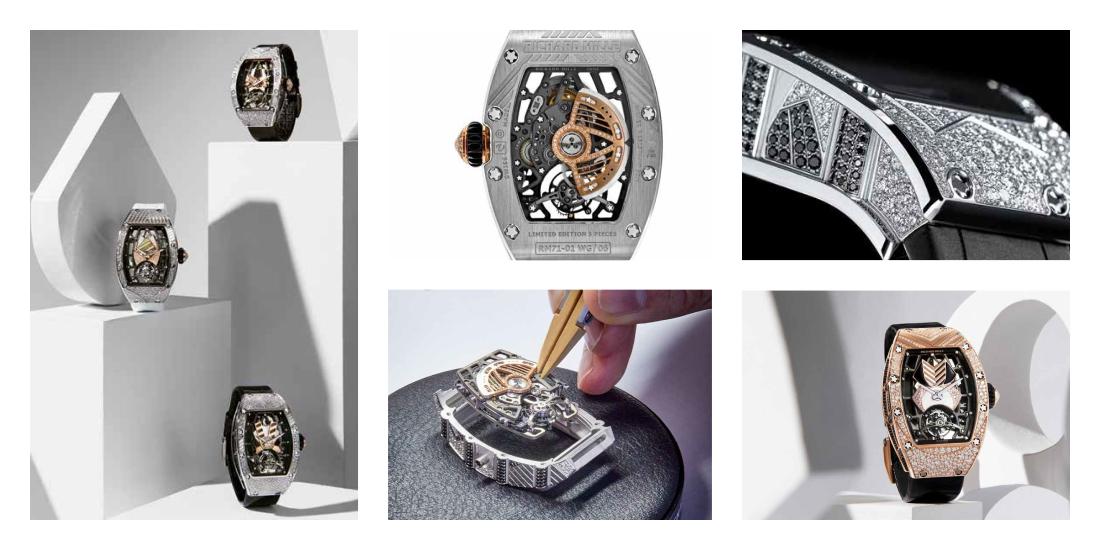 The RM 71-01 Automatic Tourbillon Talisman heralds the vitality of the brand’s dynamic new overtures to women. This precious and ornamental watch comes in ten variations, graced with different artistic dials and gemsettings and each issued in a limited edition of just five. This rare and inspired model is equipped with the first in-house developed tourbillon caliber, which is at once self-winding, super slim and highly efficient. Its qualities are highlighted by the radiance of diamonds, mother-of-pearl, onyx and black sapphires adorning the case variations. The ten interpretations of the RM 71-01 Automatic Tourbillon Talisman mingle Richard Mille’s extreme technical sophistication with the sculptural elements of art-infused jewelry.

For Richard Mille, everything stems from this art of surprise and wonderment, from this inexhaustible thirst for creativity : “We are known for our incredibly technical, high-performance watches that draw inspiration from the automotive and aeronautics industries, even though women’s watches have represented a considerable percentage of our sales for several years now. We were looking for a modern, creative and talented young female designer to accelerate this momentum and take the women’s collection to new heights. This challenge has been taken up by Cécile Guenat, daughter of my friend and business partner Dominique, who overcame technical obstacles, breaking free of conventions to assert a singular and resolutely contemporary style.” It is worth looking back at this adventure that began three years ago, when Cécile, the current Ladies’ Collection Director, was asked to design new creations. An exciting endeavor for this graduate of the Geneva School of Art and Design (HEAD) who had majored in jewelry, before putting her expertise to the test at a jeweler’s in Lausanne and then with a London- based jewelry designer for whom she created collections for various couture labels and newly created brands. From first sketch to gem selection, Cécile Guenat displays the kind of rigorous discipline that shapes destiny by dint of talent and passion.

Talisman, a name that evokes protective magic. At the creative confluence of Art Deco, Primitive Art and tribal inspirations, these watches were born from a mesmerizing alchemy : “My work is the fruit of very different influences. In designing this collection, I drew not only on Art Deco and Primitive Art – masks, African sculptures – that have had an extremely important influence on most of the great modern and contemporary artists. The geometry and the sacred nature of these objects hold a special fascination for me, especially in that they foreshadowed today’s design through their fusion of form and content”, says Cécile Guenat. The idea of a collection took shape right from the initial sketches, with different versions emerging in the shape of various case and dial interpretations. Cécile chose to highlight the skeletonwork movement through a broad variety of gemsettings and case engravings. Magnified by the radiance of the stones, the dials evoke two deliberately separate universes : one more plantbased and the other more urban.

The RM 71-01 Automatic Tourbillon Talisman abolishes the distinction between the precious mechanism and its ‘jewel case’. Movement, dial and case engage in an aesthetic, technical, architectural and graphic dialogue. As Richard Mille points out : “We also had to match this exceptional creation with a technical feat in order to highlight the launch of this first in-house selfwinding tourbillon caliber ! Although a major accomplishment in itself, this specific feature is simply an addition to the other exceptional characteristics in terms of performance, reliability and breathtaking finishing.” In this sophisticated tourbillon model, the brand thus proudly presents its eighth inhouse movement: Caliber CRMT1. The baseplate protecting the tourbillon’s rotation remains open so as to ensure optimal transparency. This skeleton- worked, tonneau-shaped titanium movement – measuring just 6.2mm thick and weighing only 8 grams – is housed in a white or red gold case.

Within the company workshops, everyone concurs with the principle that beauty must conceal the effort required to create it and that the long hours spent at the workbench must vanish before the self-evident splendor of the completed model. Says Salvador Arbona, Head of Movement Development : “The first challenge was to create a self-winding tourbillon movement that could be housed within the narrow and domed shape of an RM 037 case. The next was to align it with our accustomed level of performance in terms of precision timekeeping, automatic winding and shock resistance.” Far from being a frail object, this feminine jewelry watch is “built for daily wear, notably because it is self-winding”, adds Arbona. “Its architecture is discreet enough to ensure that the dial, hands and exterior take center-stage.”

Cécile Guenat was also keen to offer a jewelry décor worthy of the brand’s mechanical refinement. Never before have so many different professions been called upon for a single model : jewelry artisans, dial-makers and watchmakers all endeavored to satisfy the requirements imposed by the complexity of this watch. While hand-crafted and artistic approaches meet and mingle in openworking, gemsetting and dial production, the mechanism itself offers a field in which ideal proportions are expressed, as gear-wheels click into place and the movement works its magic. The RM 71-01 shines in every possible way, but also in a definite direction, as confirmed by even the smallest stretches of precious stones whose pattern systematically extends or evokes a line of force within the movement. Each of the ten delicately hand-set, ultra-thin 0.9mm dials is perched on top of the central tourbillon section. This component represents an authentic technical challenge due to the numerous finishing operations involved : sandblasting, polishing, setting – all within an extremely small area arranged on several levels. The bezel, as ordained by the initial design, is variously adorned. The shape, technique and number of carats differ according to the version : snowsetting and/or bead setting. Laid out like a fan or in bands, the gemset caseband thus diffuses the light of the stones across extremely rare angles. The caseback is engraved with matte bands, creates a striking contrast with the brilliance of the stones and the polishing on all the other parts of the model.

The new RM 71-01 Automatic Tourbillon captures the path of time and sparkles like an amulet as the light plays across its many facets. Living up to its role as a talisman, yet without concealing the more mechanical elements that are an integral part of the brand identity, it becomes a naturally stunning companion of the woman thus adorned with its pleasing aesthetic.